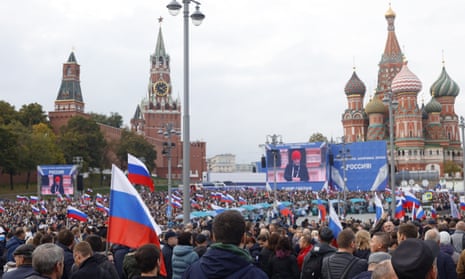 Ukraine has formally submitted its application to join the Nato alliance, its president, Volodymyr Zelenskiy, has announced.

In a video update, Zelenskiy said Ukraine was “taking a decisive step for entire security of free nations”.

We see who threatens us. Who is ready to kill and maim. Who in order to expand their zone of control does not stop at any savagery.

During his address, which was published after Vladimir Putin signed decrees formalising Russia’s illegal annexation of four occupied regions in Ukraine, Zelenskiy vows to liberate the “entire territory” of his country.

Addressing the crowds in the Red Square, Putin vows to “do everything” to “raise the level of security” in the Kherson, Zaporizhzhia, Luhansk and Donetsk – regions in Ukraine the Russian president formally annexed earlier this afternoon.

Dear friends, we will do everything in order to support our brothers and sisters in Zaporizhzhia and Kherson, and in Donetsk and Luhansk.

We will do everything in order to raise the level of security in these territories for these people.

We will do everything to restore the economy and restore infrastructure, build schools, new institutions, hospitals.

He ends his speech by saying:

We have become stronger because we are together. We have the truth. And the truth means power. At means victory. Victory will be ours.

Today is a “historic day”, Putin says, “a day of truth and justice”.

He repeats his unfounded claims that Ukraine is “trying to eradicate” the culture of the people who live in the Luhansk and Donetsk regions and says the residents in these regions “made this choice to be with its ancestral motherland” in so-called referendums that Ukraine and the west have denounced as illegal and illegimate.

Russia is not just opening the doors to our home. Russia is opening its own heart. Welcome home.

It is just past 7pm in Kyiv. Here’s where we stand:

Hello everyone, it’s Léonie Chao-Fong still with you with all the latest news from the war in Ukraine. Feel free to get in touch on Twitter or via email.

Ukraine’s prime minister, Denys Shmyhal, has confirmed that Kyiv has submitted its formal application to join the Nato military alliance.

Shmyhal tweeted a photo showing that he, President Volodymyr Zelenskiy and the speaker of parliament, Ruslan Stefanchuk, had signed a formal fast-track Nato membership application.

Eight-and-a-half years after Vladimir Putin announced the annexation of Crimea, he gathered the elites of Russia in the Kremlin’s St George Hall for another land-grab ceremony: this time laying claim to four more Ukrainian regions.

The annexation formalities were preceded by an angry, rambling speech which dwelled only briefly on either Ukraine or the four regions of which Russia now claims ownership. Instead, Putin railed at the west for a litany of sins, ranging from destabilising Russia in the 17th century to allowing gender reassignment surgery.

He also reiterated his threat to use nuclear weapons, claiming the US had “created a precedent” for the use of nuclear force in 1945.

Friday’s speech is likely to go down as another milestone in Putin’s long reign over Russia. And while it was the same hall, the same crowd and the same message as the Crimea annexation in March 2014, the context is very different.

Then, Putin carried much of Russia’s elite and society with him, on a wave of patriotic fervour boosted by state television propaganda. Outside Russia, while many were shocked at the naked land grab, others felt Putin had a point: after Iraq and Libya, how could the west lecture others on violating sovereignty? Many European politicians wanted to get back to business as usual with Russia as quickly as possible.

This time, the domestic and international situations are far less favourable for Putin. At home, he has embarked on an unpopular mobilisation drive, prompting hundreds of thousands of Russians to try to leave the country. The improvements in quality of life that the first years of Putinism brought are drying up amid sanctions and international isolation. 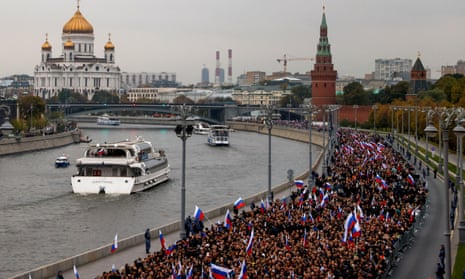 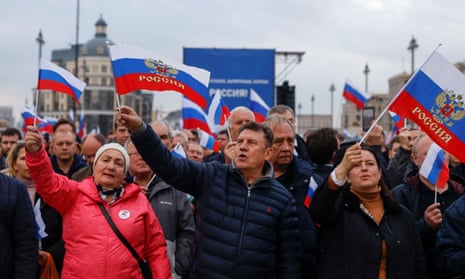 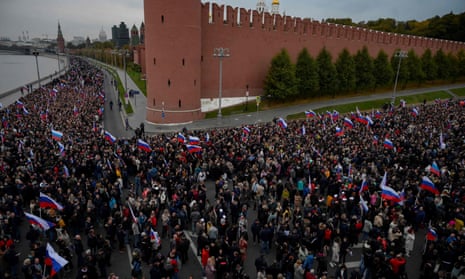 A crowd on the edge of Red Square in central Moscow for a rally and a concert marking the annexation of four regions of Ukraine. Photograph: Natalia Kolesnikova/AFP/Getty Images

The former prime minister of the UK, Boris Johnson, has described Vladimir Putin’s speech earlier today announcing the formal annexation of four Ukrainian territories as “a fraud and a disgrace”.

The world must never accept your sham referendums or your cruel and illegal attempt to colonise Ukraine.

Britain will stand with the people of Ukraine and will support them “without flinching until their country is whole and free”, he added.

Vladimir Putin your speech is a fraud and a disgrace. The world must never accept your sham referendums or your cruel and illegal attempt to colonise Ukraine. We stand with the people of Ukraine and will support them without flinching until their country is whole and free.

Ukraine’s foreign minister, Dmytro Kuleba, said “nothing changes” for Kyiv and that it will continue liberating its territory occupied by Russia.

Kuleba accused the Russian leader of trying to “grab territories he doesn’t even physically control on the ground”.

By attempting to annex Ukraine’s Donetsk, Luhansk, Zaporizhzhia and Kherson regions, Putin tries to grab territories he doesn’t even physically control on the ground. Nothing changes for Ukraine: we continue liberating our land and our people, restoring our territorial integrity.

Taken together, Russia is annexing at least 40,000 square miles of eastern and southern Ukraine, about 15% of Ukraine’s total area, equal to the size of Portugal or Serbia.

The UK is stepping up sanctions against Russia following the “illegal” annexation of four areas of Ukraine, the foreign secretary James Cleverly has announced.

The measures will restrict Russia’s access to key British commercial and transactional services, as well as ban the export to Russia of almost 700 goods that are critical to manufacturing production, the Foreign Office said.

In a statement, Cleverly said:

The Russian regime must be held to account for this abhorrent violation of international law.

That’s why we are working with our international partners to ramp up the economic pressure through new targeted services bans.

What happens in Ukraine matters to us all, and the UK will do everything possible to assist their fight for freedom.

The announcement of a fresh wave of UK sanctions against Russia comes as the Russian ambassador to London was summoned by Cleverly to protest the Russian annexation of four Ukrainian regions – Kherson, Zaporizhzhia, Luhansk and Donetsk.

I have summoned the Russian Ambassador, Andrey Kelin, to protest in the strongest terms against Putin’s announcement of the illegal annexation of sovereign Ukrainian territory.

Who is Taika Waititi’s and when did he marry Rita Ora?

Ukraine news - live: Russia says it had ‘no choice’ but to cancel US nuclear talks

I was on I’m A Celebrity and Matt Hancock will struggle for money after ‘immature’ behaviour, warns former campmate

Ecuador vs Senegal live stream: How to watch World Cup fixture online and on TV today

What TV channel is Ecuador vs Senegal on? Kick-off time and where to watch World Cup 2022 fixture today

Can England and Wales both qualify for World Cup last 16?

Pong at 50: the video game that ‘changed the world’