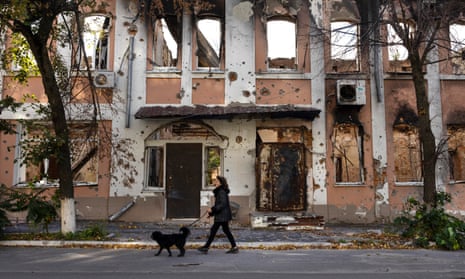 That is it from me, Martin Belam, for now. I will be back later on. Rachel Hall will be with you for the next few hours.

Diplomatic relations between Russia and Japan continue to deteriorate. Reuters reports the Japanese foreign minister, Yoshimasa Hayashi, has ordered a Russian consul in Sapporo to leave Japan by 10 October.

Japan’s decision comes after Russia’s FSB security agency said last month that it had detained a Japanese consul in Vladivostok for suspected espionage and ordered him to leave the country. Japan denied that the diplomat was a spy, and alleged that the consul was mistreated while in Russia custody.

Volodymyr Zelenskiy has signed a decree formally declaring the prospect of any Ukrainian talks with Vladimir Putin “impossible”.

“He [Putin] does not know what dignity and honesty are. Therefore, we are ready for a dialogue with Russia, but with another president of Russia,” Zelenskiy said on Friday.

Clause one of the decree, which was prepared by the National Security and Defence Council of Ukraine on 30 September, reads “[Ukraine decided] to state the impossibility of conducting negotiations with the president of the Russian Federation Vladimir Putin.”

Here is a picture from earlier in the day as Russia’s Federation Council approved legislation to annex four occupied areas of Ukraine. 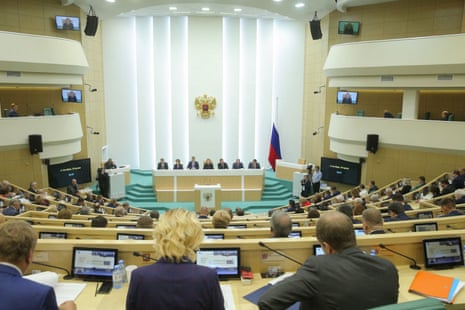 The governor of Kursk in Russia, Roman Starovoyt, has posted to Telegram in an attempt to reassure residents that the partial mobilisation in the region is being carried out in accordance with law. He writes:

Partial mobilisation activities are taking place as planned. We are closely monitoring that everything goes according to the current legislation and the selection criteria that Russian President Vladimir Putin named. We work out individually all the complaints that come to the administration. At the moment, we have 149 appeals, 71 have already been considered. In total, 45 decisions have been made in the region to cancel the mobilisation. We will continue this work.

A Russian court has fined the streaming service Twitch 4m roubles (£60,000/$68,000) for failing to remove an interview with a Ukrainian political figure, the Interfax news agency reported.

Twitch, which is owned by Amazon, did not immediately respond to a request for comment from Reuters.

The Russian RIA Novosti news agency is carrying this summary of what the annexation means legally according to the treaties Russia claims to have conducted with the four occupied areas of Ukraine, the so-called People’s Republics of Donetsk and Luhansk (DPR and LPR), and the regions of Kherson and Zaporizhzhia. It writes:

The borders of the DPR, LPR, Kherson and Zaporizhzhia regions, connected with the territory of other countries, are the state border of Russia. Until 1 January 2026, all four new subjects have a transitional period to resolve issues of military duty and military service. Within the same time frame, the issues of integrating new regions into the economic, financial, credit and legal systems of Russia, as well as into the system of government bodies, should be resolved.

Russian legislation and other normative legal acts are effective in new regions from the day they are accepted into Russia. Normative legal acts of the Kherson and Zaporizhzhia regions are not applied if they contradict the constitution of Russia. Official documents of the DPR and LPR are valid until the end of the transition period or the adoption of Russian relevant legal acts.

Citizens of Ukraine, other countries and stateless persons residing in new regions are recognised as citizens of Russia, except for those who within a month declare their desire to retain their existing citizenship or remain stateless.

Russia guarantees all peoples living in new regions the right to preserve their native language and create conditions for its study and development.

Russia and North Korea are the only UN member states to so far recognise the “results” of the “referendums” staged by the occupying authorities in Ukraine.

The upper house of Russia’s parliament has voted to approve the incorporation of four occupied Ukrainian regions into Russia, as Moscow sets about formally annexing territory it seized from Kyiv since staging its latest invasion of Ukraine in February.

In a session on Tuesday, the Federation Council unanimously ratified legislation to annex the Donetsk, Luhansk, Kherson and Zaporizhzhia regions of Ukraine, following a similar vote in the state Duma, Russia’s lower house, yesterday.

Reuters reports the documents now pass back to the Kremlin for President Vladimir Putin’s final signature to complete the process of formally annexing the four regions, representing about 18% of Ukraine’s territory, in a move that is unlikely to be recognised legally outside of Russia itself.

Russia does not fully control the territory it is claiming to annex.

Here are some of the latest images that we have been sent from Izium in Ukraine over the newswires. 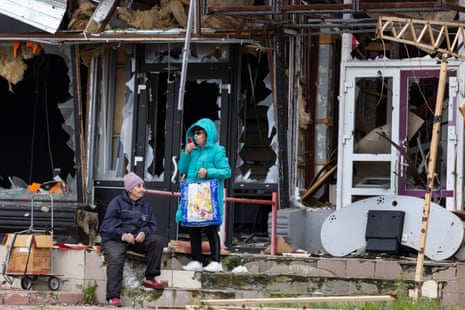 Women try to use their phones outside a destroyed building in Izium. Photograph: Paula Bronstein/Getty Images 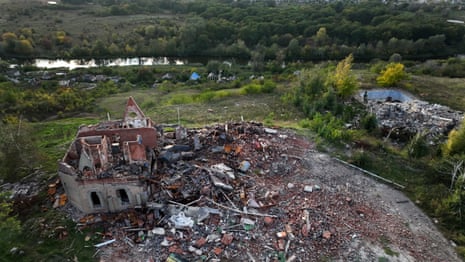 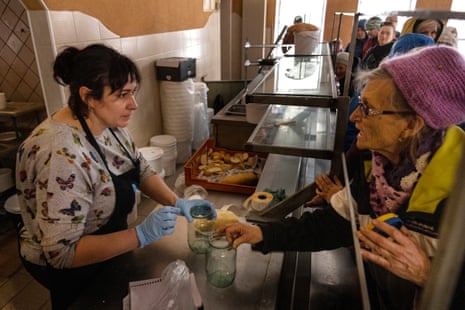 Residents line up in a newly opened soup kitchen in Izium. The town is still without electricity and water since being liberated. Photograph: Paula Bronstein/Getty Images

Maksym Kozytskyi, the governor of Lviv in Ukraine’s west, has posted a status update to Telegram to say that no air raid alerts happened overnight in his region. He said that in the last 24 hours there have been 145 people arriving in Lviv from the east of the country on evacuation trains, and that 552 people evacuated into Przemyśl in Poland on four evacuation trains.

The Wanted's Nathan Sykes is ENGAGED after stunning beach proposal

I’ve felt there’s stigma around me because I’m from a reality TV show, says Olly Murs