The date for the UK’s first-ever space launch has been set as VirginOne prepares its LauncherOne mission to take off from Spaceport Cornwall. According to NASA Spaceflight editor Chris Bergin on Twitter: “Virgin Orbit's LauncherOne mission has a ‘launch window scheduled to open Dec. 14, 2022, but that date could change to Dec. 15-16 or later’.“It'll take off with Cosmic Girl from Cornwall, UK. The launch will be over the Atlantic.” 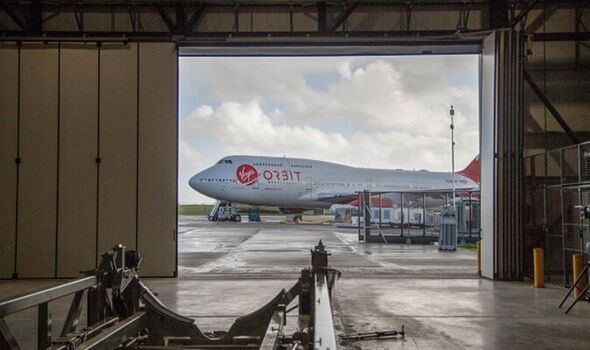 The LauncherOne rocket will be ferried up to 35,000 feet under the wing of ‘Cosmic Girl’, pictured (Image: Getty Images)

While the two-stage-to-orbit, air-launched LauncherOne rocket has been used in five missions, this is the first to depart from UK soil. Previous missions departed from the Mojave Air and Space Port of California, in the USA.

Virgin Orbit CEO Dan Hart has said: “What an incredible honour it is for us to be part of something as monumental as bringing Britain into the business of launch.

“Working with our partners across the UK government, we’re starting up a new capability that will serve the people, the economy, and the security of the UK.”

According to Virgin Orbit, the flight manifest for “Start Me Up” is completely full. It includes payloads provided by seven global customers.

Among these are the two shoebox-sized satellites — known as ‘CubeSats’, after their shape — that will make up the Ministry of Defense (MOD)’s Defense Science & Technology Laboratory’s Prometheus-2 mission.

According to the UK Space Agency, the pair of CubeSats “will provide a test platform for monitoring radio signals including GPS and sophisticated imaging, paving the way for a more collaborative and connected space communication system with our allies.”

Joining the Prometheus-2 craft onboard LauncherOne will also be “DOVER”, a pathfinder satellite for resilient global navigation satellite systems; “ForgeStar-o”, an in-space manufacturing facility designed to return to Earth for re-use; and “AMAN”, a single Earth-observation satellite that represents the first orbital mission for the Sultanate of Oman.

On the occasion of the launch equipment departing California for Cornwall back in mid-October, the Minister of State for Industry and Investment Security, Nusrat Ghani, said: “As we move ever closer to the first satellite launch from UK soil, it’s excellent to see the progress being made by Virgin Orbit, Spaceport Cornwall and those across government in delivering this historic mission, the first of its kind in Europe.

“With 47,000 jobs across the U.K., our growing space industry is a vital part of the economy and has an important role to play in catalysing investment, generating growth and prosperity. I’m looking forward to working with this innovative sector and delivering on our National Space Strategy.”

“Developing new launch capabilities will build on the strengths of our space sector and attract companies from around the world to benefit from these commercial opportunities. This will catalyse investment, bring new jobs to communities and organisations right across the UK, as well as inspiring the next generation of space scientists and engineers.”

I fought brutal Wagner troops for 10 hours at a time – they came in waves like zombies, says Ukrainian soldier

Dad loses custody of daughter, 5, after leaving Alexa to 'babysit' as he went to pub

Major passport warning as prices to increase from TODAY

Economy is pummelled on the biggest day of action in a decade as civil servants, bus and rail staff, lecturers and teachers go on strike