“This is how they stole money from the Pope”

ROME - An extraordinary 59-page document is unveiling an intricate mole-like maze of corruption that is crushing the Vatican. Rapacious and feeling almighty, those involved have engineered diabolical operations to plunder the Holy Sea, and even get hold of Pope Francis’ reserved account, the most protected of Vatican coffers. The probe submitted by the papal prosecuting attorney tracking back a 454 million heist depicts a merciless picture of an assault on the financial assets of the Vatican. A London property real-estate deal has given way to a momentous scandal involving a number of monsignors, brokers and business lawyers, besides outlining a snapshot where Pope Bergoglio is a white spot surrounded by black souls who betrayed him. 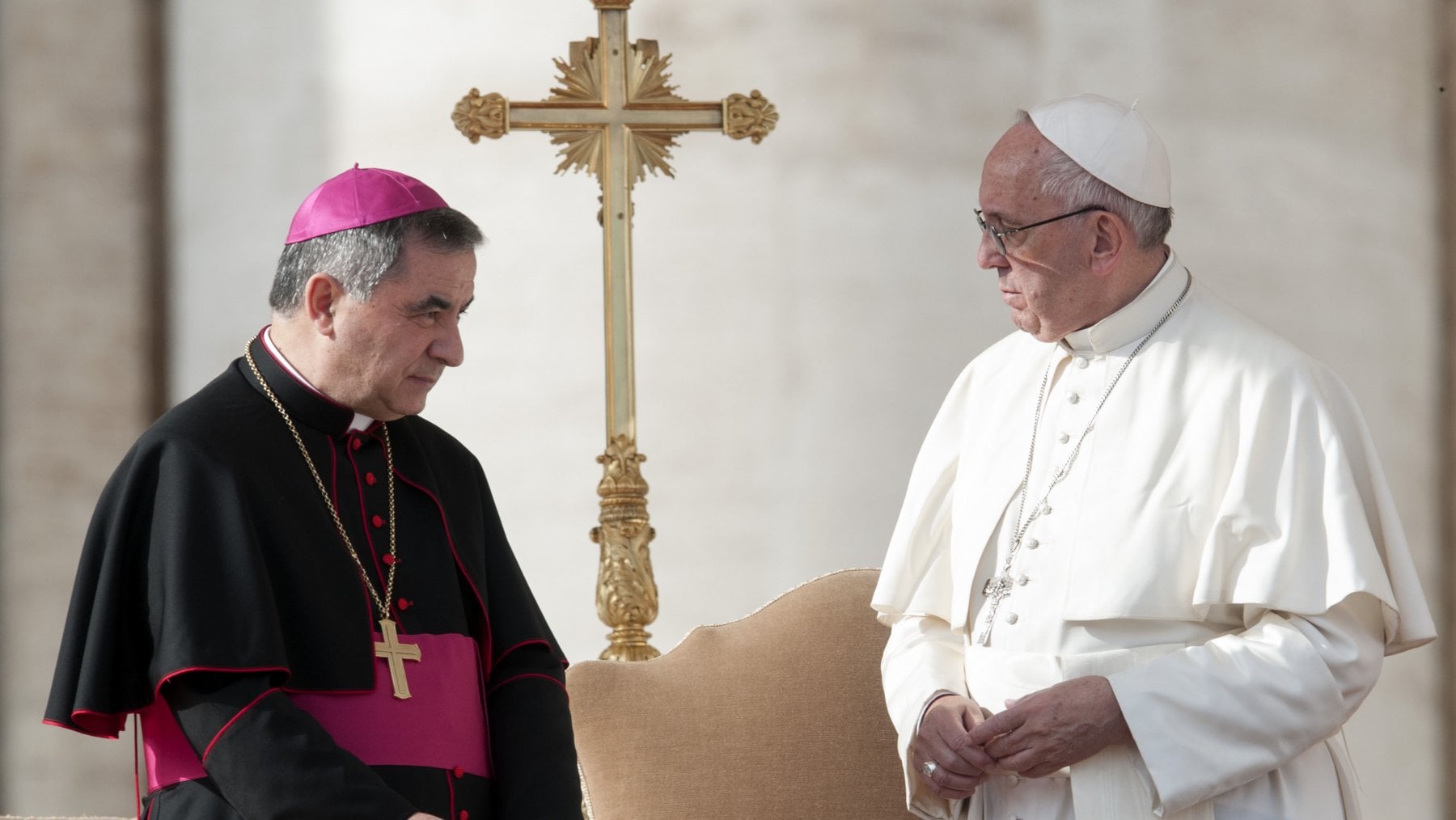 The attorney’s summary is shocking: "The Secretariat of State financed the London operation with a 200 million dollars line of credit coming from Credit Suisse and from Banca della Svizzera Italiana and guaranteed by a pledge of assets the Secretariat of State owns after collecting them through donations to the Peter’s Pence.” In other words, the money given for alms, went to service speculations amounting to sums yet to be reckoned “that could top 454 million euros".

From investments to blackmail

The investment’s stated goal was to buy the Harrods building on Sloane Avenue in London. The price of the building, however, began miraculously to increase. "A substantial accounting reappraisal was undertaken before the Secretariat of State underwrote the shares. Carried out by the fund managers, it doesn’t appear to have had a valid economic reason as of now in the investigations,” the Promoter of Justice Gian Piero Milano and his deputy Alessandro Diddi write. "Several companies whose financing partners are not to be known” were involved in the deal. Probe records point to the dealmaker Raffaele Mincione as the person directing the operation. The files in the PC of a staff at the Secretariat of State, Fabrizio Tirabassi, further indicate him as being a “friend of Cheyne's boss.”

Mr. Mincione from Pomezia, a municipality in the Rome region Lazio, is ever-present in a number of financial deals, from the fight for the Genoa bank Carige to that for controlling Retelit (in which he was assisted by lawyer Giuseppe Conte until a few days before the latter settled in the prime minister’s office in Palazzo Chigi). A whirlwind of acronyms, which seem to function just as a “black hole” for money flows, surrounds him triggering a feeding frenzy from power groups.

This is how mysterious Gutt SA, a Luxembourg company, comes into the picture. The owner of Gutt is Gianluigi Torzi, a “high-risk” financial dealmaker ranking in the world’s “bad press” index. The prosecuting attorneys write that he has "contracts signed by Monsignor Alberto Perlasca in his capacity as attorney for the deputy Monsignor Edgar Peña Parra. Gutt SA is to manage the property on behalf of the Secretariat of State. The Secretariat verbally commits to pay Gutt SA a 3 percent on the deal for an equivalent of 10 million euros. Such agreement is not formalized in any contract.” Monsignor Perlasca and Mr. Tirabassi’s verbal commitment are deemed sufficient.

Why did they choose Gutt SA? Mr. Tirabassi, a Vatican employee holding an account at the Institute for the Works of Religion through which he cleared one million euros by applying to the voluntary disclosure, claims to have been the victim of blackmail. It was "an extortion Mr. Torzi committed." The investigators believe that this version "conceals in all likelihood a sensationally well-orchestrated artifice, protected by Mr. Tirabassi and perhaps other people’s complicity."

The final outcome of the scheme was disastrous. “Shares in the fund shed 18 million euros. The Gutt SA operation caused a loss of 100 million. In brief: against an outlay of 250 million, the Secretariat of State became the owner of a property worth on paper 260 million, to secure the property rights of which, it will need to bear in the end 363 million (net of mortgage interests).”

A very profitable deal for consultants

Some individuals are good at having gold keep coming in. Lawyer Nicola Squillace, with the law firm Libonati Jaeger, pocketed "200 thousand euros for a generic legal consultancy assignment, in excess of further 150 thousand for indicating other professionals.” Right after this, he issued another invoice for 364 thousand euros. The Vatican did not pay, but he managed to bypass the obstacle. "With this gambit, Mr. Squillace, with Gianluigi Torzi being complicit, not only managed to elude the veto, but got paid another additional 17,000 euros." Overall, 711 thousand euros vanished for unexplained consultancy fees. The records show British law firms getting hold of millions with no explanations provided.

They felt omnipotent. Mr. Tirabassi and Monsignor Perlasca manage to even penetrate "the UBS Discretionary Fund created in 2015 as a reserve for the Holy Father’s discretionary expenses and others he would authorize.” Twenty million pounds went from this fund to Mr. Torzi’s accounts. For consultancy fees regarding other real estate operations he was proposing to the monsignors he billed 5 million: a hotel in Milan in the San Siro area, a building in Piazza Cavour, one on New York's 5th Avenue, a hotel for the Dubai Expo—rather reporting on the Vatican, it feels like playing Monopoly.

The probe unveiled a new and very murky front of papal investments: the securitization of the debt that several private hospitals and cooperatives submitted for payment to local health authorities. A case in point were the companies that became intermediaries in the business relations between the Fatebenefratelli Hospital in Rome and the Lazio Region government.

Furthermore, a link was established between the Vatican and a cooperative, OSA, which thanks to Mr. Tirabassi's recommendation was granted a super contract with the Bambino Gesù pediatric hospital. Involved in this deal was an individual reported to have "strong ties with people and circles linked to the Apulian Camorra (the Bell and the Sacra Corona Unita clans).” The deal with the Villa Maria Group, a private hospitals holding, is one of several other similar deals.

In sum, this is the fertile ground of intricate businesses that initiated which the relations inside San Pietro, and put Mr. Tirabassi and Mr. Torzi in a position to set up the Gutt SA operation, "a well-planned maneuver to carry out a huge looting of Secretariat of State resources with no equal".

Cardinal Angelo Becciu entered this game sideways owing to his secretary Monsignor Mauro Carlino’s relations. In his case, the prosecuting attorneys underline "a particular ease in moving in the high spheres of the State hierarchy, and his ceaseless activities involving individuals having a reputation in financial environments to bring about new entrepreneurial deals”. His meeting Luca Dal Fabbro, the president of Italian SNAM S.p.A., one of the world’s leading energy infrastructure companies, is an example. They reportedly discussed refinancing the London property’s mortgage and other new projects, involving once more Raffaele Mincione’s circle and one «Mr. Preziosi from Genova. (This was likely Enrico Preziosi, the well-known toys entrepreneur of Giochi Preziosi, already put on remand, and pointed to by Dal Fabbro as an individual “on many people's mouth”).”

As to Monsignor Carlino, one of the individuals he is reported to have met is quite puzzling. Giovanni Ferruccio Oriente, "as revealed by wiretapping records, appears to have access to the Italian ministry of Internal Affairs, and to be able to gain access to all criminal charges filed by attorneys. He has knowledge about Mr. Torzi's deals (the latter having pointed him out as a person who had approached Giulio Tremonti, [minister of Economy and Finances under prime minister Silvio Berlusconi], and Franco Frattini, [twice minister of Foreign Affairs with the Berlusconi cabinets]. Moreover, he seems to be in close contact with reporter and author Gianluigi Nuzzi, who is drafting a book with documents uncovered in the Vatican.” He also does business with Mauro Di Lello, an "entrepreneur and football players agent." Last but not least, he was involved in the discussion for a deal around the Acquafredda estate, a property of the Administration of the Patrimony of the Apostolic Sea. "Monsignor Carlino shows to be well aware that the operation must be disguised behind social purposes, ‘otherwise they’ll bullet-riddle us that we just do speculative or commercial deals’."

Nobody is exempt. The Vatican prosecuting attorneys are also after Tommaso Di Ruzza, the director of the Vatican’s Financial Information Authority, the very head in charge of supervising the Holy See accounts to prevent obscure maneuvering. He nonetheless “played an role in the London deal, a role which is not clear at all. He did not, in any way, detect the anomalies in the operation,” despite having corresponded with the parties involved. Moreover: "Mr. Di Ruzza faked on his Office's letterhead a delegation to handle on behalf of Mr. Torzi in the capacity of intermediary.” The attorneys now know that he is the owner of a British company called Aquinas Foundation, and he is being further investigated—the aim being trying to understand how so many prelates, often appointed by Pope Francis himself, were ready to betray his mission to fill their pockets with money.

Translated from Italian by Marina Parada.

Denial of responsibility! The World News is an automatic aggregator of the all world's media. In each material the author and a hyperlink to the primary source are specified. All trademarks belong to their rightful owners, all materials to their authors. If you are the owner of the content and do not want us to publish your materials, please contact us by email [email protected]. The content will be deleted within 24 hours.

A fuoco capannone Amiu sopra Pegli, in azione i VVF

Rapina in farmacia a Ventoso È la seconda in due giorni