Jarring surveillance video showed a two-year-old girl being attacked by a coyote in broad daylight Friday on the front lawn of a home in Los Angeles. The girl survived and is recovering.

The attack, which took place in the Woodland Hills neighborhood, was caught on the family's Ring camera system.

In the video, the family appears to be getting out of their car when a coyote approaches the girl on the front lawn and begins to drag her by her legs, prompting the toddler to scream. When the girl's father approaches, the coyote lets go of the girl and backs off.

"I just wanted to make sure she was OK," the girl's mother, Shira Eliyaheo, told CBS Los Angeles.

The video shows the girl's father throwing a rock at the animal.

"I grabbed her and laid her down," Eliyaheo said. "I saw blood on her pants and on her leg and where she got injured. It was just terrible." 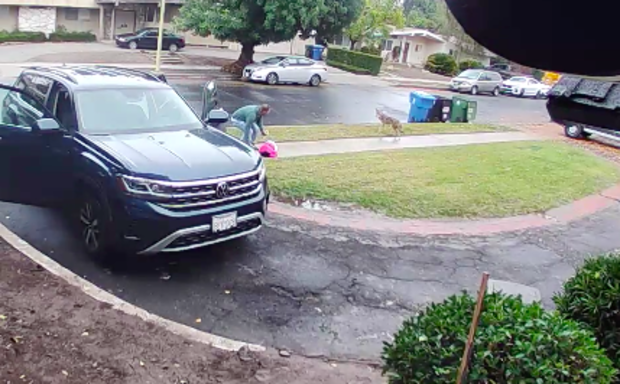 Ring surveillance videos shows a 2-year-old girl being attacked by a coyote in a neighborhood in Los Angeles, California. Dec. 2, 2022.  Ring/Cabir family

Eliyaheo told CBSLA that her daughter was taken to a hospital for treatment, where she received a series of rabies shots and is recovering.

A spokesperson for the California Department of Fish and Wildlife (CDFW) told CBSLA Saturday that, prior to the attack, it had received several reports about an aggressive coyote in the neighborhood from area residents. It was working to get a DNA sample of the coyote from the girl's clothing.

CDFW staff were also on standby in the area with dart guns if another sighting is reported, the spokesperson said.

There have been several coyote attacks in the Southern California area this year. In April, another 2-year-old girl was attacked by a coyote on a beach in the city of Huntington Beach. Responding police officers then shot and killed two coyotes in the area, and CDFW biologists used DNA samples to confirm that one of those two coyotes had attacked the girl. She suffered serious injuries, but survived.

In June, a coyote attacked a 2-year-old girl in a park in the Orange County city of Fountain Valley. That girl survived as well.

The CBS LA Staff is a group of experienced journalists who bring you the content on CBSLA.com.

The best contemporary romance novels, per Goodreads and a ‘BookTuber’

Two Years After Coup, Battle of Attrition Grinds on in Myanmar

Suicide bomber kills at least 32 at mosque in Pakistan

Forget Mushrooms, The Real Villain of ‘The Last of Us’ is Carbs

Here's why you should always wait for the earnings call

More than 40 million people are under winter weather alerts from Texas to West Virginia, with significant icing likely

Customers and musicians among 8 killed in nightclub shooting in Mexico

American pro reportedly among skiers killed by avalanche in Japan

Suicide bomber kills at least 17 at mosque in Pakistan

Mosque Bombing in Pakistan Kills and Injures Dozens of Worshipers

Zachary Levi sparks Twitter controversy over claim that Pfizer is a 'danger' to the world: 'Hardcore agree'

Florida dog found cemented to sidewalk, diagnosed with more than 20 medical conditions: 'He was left to die'

Renault will slash stake in Nissan as they overhaul their alliance

House GOP grits its teeth for the 'big lift': A budget battle

U.S. arms left in Afghanistan are turning up in a different conflict

US Defense Officials Not Losing Sight of China, North Korea

Novak Djokovic wins Australian Open a year after being deported: 'He stood on principle'

Consumers could be in a ‘world of hurt’ if Biden doesn’t act soon, former Walmart CEO warns

Dear Abby: My wife loves her former husband more than me

Ukrainian President: ‘We Have to Make Time Our Weapon’

Lisa Loring, who played Wednesday Addams in "The Addams Family," dies at 64

Lisa Loring who played the original Wednesday Addams dead at 64

After a weekend of protests against police brutality, Memphis officials note that investigation into Tyre Nichols' death is not over

Kansas City Chiefs and Philadelphia Eagles to Face Off in Super Bowl LVII on Feb. 12