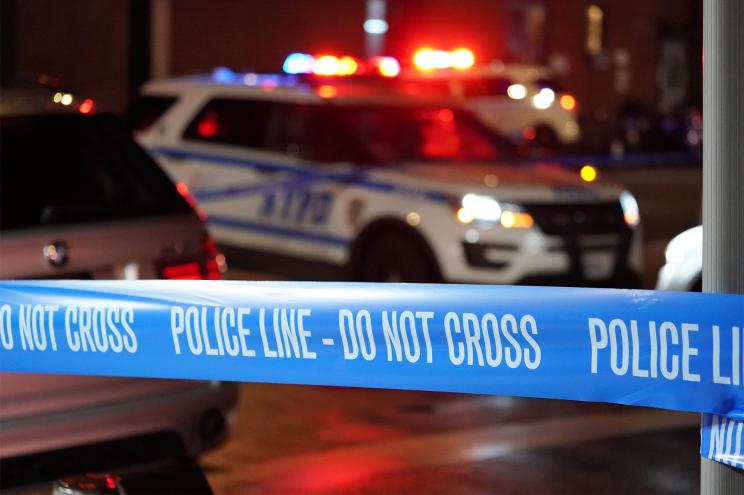 Three people were attacked with eggs and bricks near the Lincoln Center on Saturday. Christopher Sadowski

Three people were attacked with a brick and eggs, then robbed on their way to protest a drag queen event near Lincoln Center Saturday morning, cops said.

The three were walking southbound on Amsterdam Avenue at 11:06 a.m. when six people — wearing black hooded shirts and black masks — attacked them from behind.

One of the victims, a 31-year-old man, was punched and kicked while the assailants snatched his coat, phone, and a sign, according to authorities.

An attacker, meanwhile, picked up a 47-year-old woman and threw her to the ground as the attacker tried to steal her bag.

The third friend, a 27-year-old man, was pushed and hit as he “was trying to defend his friend,” cops said.

The masked thieves then chucked a brick and eggs at the protesters, but missed, according to police.

No arrests have been made. The attackers were described as a woman and five men, all wearing black hoodies and masks.

Dave Bautista wonders if he’s too ‘unattractive’ for rom-coms

Walmart flash deal: Save on this LG 4K smart TV before the big game

Instagram's founders are back with a new app

Stormy Daniels on hosting ‘DILF’ gay dating show: ‘I know sexy when I see it’

What Time Will ‘New Amsterdam’ Season 3 Be on Netflix?

Senators vs. Canadiens prediction: Our NHL pick is the favorite on Tuesday, Jan. 31

Americans are getting more skeptical of Biden's massive aid packages for Ukraine: poll

Here are the states Americans are moving to — and why

3 rappers missing for days since Detroit appearance was scratched

RBD is going on tour for the first time since 2008. We found tickets

More than 1,600 Tuesday flights canceled as winter weather hits the US

‘The Bachelor’s Greer Blitzer Apologizes For Defending Blackface: “This Is Not A Reflection Of Who I Am Today”

Tyre Nichols’ Killing Is The Result of a Diseased Culture

Where Can I Watch ‘The Watchful Eye’? Freeform, Hulu, Online Streaming Info

Should you wait to get pet insurance?

Ashton Kutcher on Whether He Thinks Danny Masterson Is Guilty of Rape: “Ultimately, I Can’t Know”

Sunny Hostin Heats Up ‘The View’ with Call to Fight Back Against GOP: “If They Wanna Go Low, We’ll Go to the Earth’s Crust”

On the Run with George Santos

Grayson Chrisley had a ‘breakdown’ after parents went to jail: Savannah

The IRS is now accepting tax returns: How to do your taxes in 2023 and get a refund fast

Men treat me so differently — depending on my hair color

After 4 years of ‘gentle parenting’ I’m completely burned out

Dems question Kamala Harris as future president: ‘Don’t know she has what it takes’

The collab of our dreams: Tiffany & Co. and Nike — here’s what we know

US Congressman George Santos to Recuse Himself From Committee Assignments

Woman found lookalike online — and killed her to fake own death: prosecutors