Imagine if the receiver-needy Giants could acquire a target with seven career touchdowns covering 20 yards or more and proven chemistry with quarterback Daniel Jones.

Now imagine giving up nothing to get him … because he already is on the roster.

Darius Slayton has an opportunity to emerge from roster purgatory Sunday against the Bears because of the season-ending injury to Sterling Shepard, combined with the injury uncertainty around Kadarius Toney and Wan’Dale Robinson. Once considered the favorite target of his 2019 draft classmate Jones, Slayton started this season by taking a pay cut to avoid being released, was listed as the No. 7 receiver on a full-strength depth chart and was inactive for the season-opener — and aired no grievances.

“We’ll try to put [our receivers] in the best positions we can,” head coach Brian Daboll said. “But Slay has been a pro, and he’ll be ready to go.”

Slayton is a proven deep threat who has 124 catches for 1,830 yards and 13 touchdowns in three seasons. He has also 15 career drops and was buried early by the new coaching staff after too many drops in practice and no special-teams role. 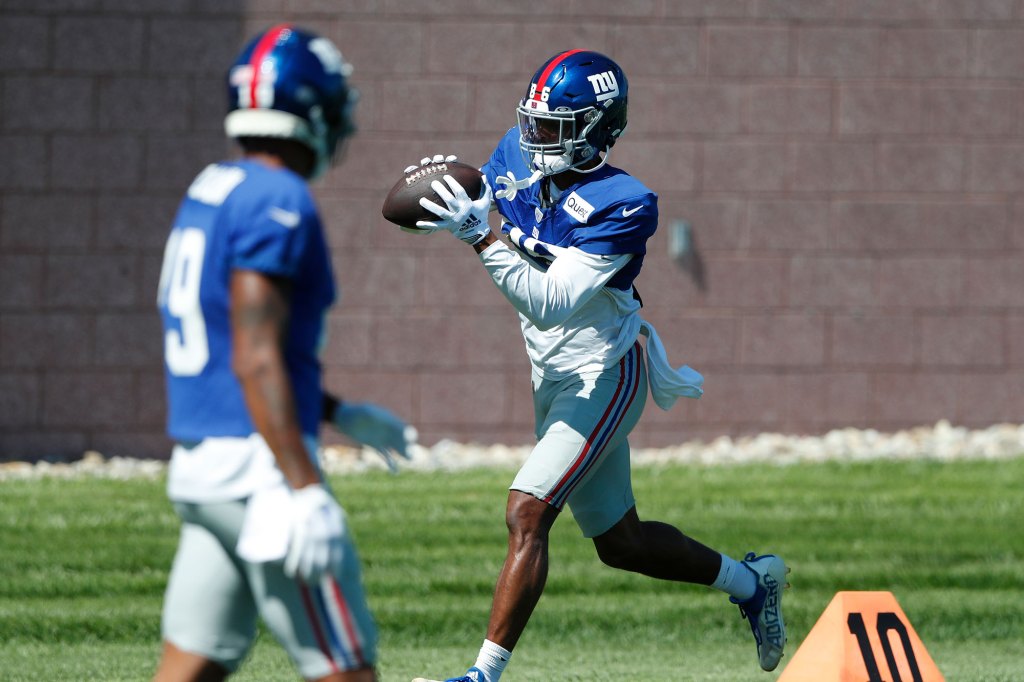 The former fifth-round pick hasn’t been targeted on any of his 18 snaps in the last two games, though he was open downfield on a double move before the pocket collapsed around Jones, as highlighted by the Talkin’ Giants podcast.

“Darius is a guy I have a lot of trust in, a lot of faith in, and I know he’s working hard,” Jones said. “As far as the game plan going forward, we’ll see how it works out.”

“I’ve spoken with Shep and obviously heartbroken for him,” Jones said. “Tough to see him go down after he’s fought so much to get back [from past injuries].”

Daboll interviewed with the Bears this offseason, but they gave the head coaching job to Matt Eberflus one day before the Giants made their choice.

“Tremendous amount of respect for Mr. [George] McCaskey and the people that were on that call,” Daboll said of the Bears’ owner. “Each interview is always a little bit different. I know Matt Eberflus well. I worked with him [with the Browns], and I think he’s done a fabulous job.”

CB Cor’dale Flott (calf) and OLB Jihad Ward (knee) did not practice and were added to the injury report.

Probe of Idaho student murders may include forensic genetic genealogy

The Grinch stole XXXmas: I’m a sexy Grinch and TikTok loves me

Elon Musk vows to release ‘everything we find’ about Twitter censorship

Sen. Duckworth calls on FAA to change how it tests airplane seat sizes

Nets' Kyrie Irving writes message on sneakers after Nike split: 'I AM FREE Thank you God … I AM'

No co-pilot? Airlines lobby for change in regulations

Oil prices jump 4% after Keystone Pipeline shut due to leak

Should cats be allowed on airplanes?

All about Emface, the treatment getting Jessica Simpson ‘camera-ready’

Stream It Or Skip It: ‘Harry & Meghan’ on Netflix, In Which The Royals Offer Unprecedented Access To And Surprising Revelations About Their Life

Iran carries out first execution by hanging over protests

WHO: COVID-19 Sets Back Global Malaria Efforts, Especially in Africa

I got ‘dress-coded’ over my ‘inappropriate’ top: ‘Disney doesn’t like backs’

Biden says Russia treating Paul Whelan case differently for 'illegitimate reasons': 'We are not giving up'

As more in North Carolina regain power, investigators probe domestic terrorism and threats against power infrastructure across the US

Christina Applegate reveals how she got MS diagnosis: It ‘sucked balls’

Who is the Russian arms dealer known as the 'Merchant of Death' that the U.S. exchanged for Brittney Griner?

Ilya Sorokin has gotten the Islanders this far, but here’s what they need to change to actually make a playoff run

Yellen to unveil first U.S. currency with her signature

How Eastern Conference parity has opened a door for the Knicks

WNBA star Brittney Griner released from Russian custody in a high-profile prisoner swap between the U.S. and Moscow

What we learned from Harry and Meghan's Netflix documentary