Our NFL betting writer brings you his best Dolphins at 49ers predictions and picks for their Week 13 showdown, which is live Sunday on FOX at 4:05 p.m. ET.

The Dolphins (8-3) are riding a five-game winning streak, entering a run of three consecutive road games, and averaged 37.4 points in November. The 49ers have won four consecutive and lead the NFL in allowing just 15.7 points per game.

Dolphins vs. 49ers predictions and analysis

The growth of QB Tua Tagovailoa has been evident and the addition of WR Tyreek Hill has pushed Miami to the forefront in 2022. The 49ers’ feared rushing attack struggled in last week’s win vs. the Saints and Christian McCaffrey (knee) has been slowed this week.

The 49ers have the only defense allowing less than 300 yards per game, holding opponents to 281.7 exactly. A menacing defensive line and solid cornerbacks have made life difficult on opponents since the team turned the corner in Week 8.

While San Francisco has won four consecutive games, they have not faced Tagovailoa’s combination of skills in that stretch. The 49ers did beat the Chargers with Justin Herbert, who is known for his accuracy, but now face a QB even more accurate in Tagovailoa.

Not only has Hill been everything the Dolphins were looking for with a team-leading 87 receptions to go along with four TDs, Jaylen Waddle has added 56 catches and six TDs. Tagovailoa has completed 69.7 percent of his passes with 9.0 yards per attempt.

Dolphins vs 49ers pick: Dolphins to cover +4 at -110 with Caesars Sportsbook 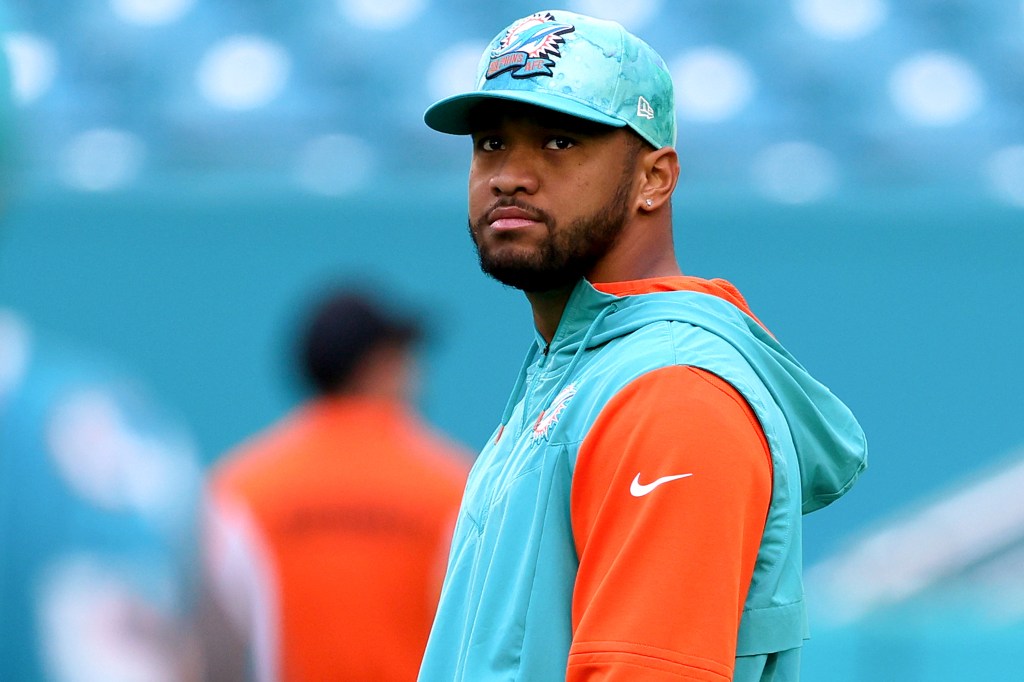 Three months into the season, the 49ers defense continues to prove itself. Just ask the Bears, Seahawks, Broncos, Rams, Cardinals and Saints, all of whom have scored 10 points or less in a game against San Francisco this season. The Saints were shut out last week.

Tagovailoa’s ability to move the pocket might come in handy against the 49ers as the Dolphins look to get creative in order to move the ball. Getting the 49ers’ offense on the move could have its challenges, although a return home will help.

The Dolphins are 10th best in the NFL against the run (109.5 yards per game) and are coming off a game Sunday when they held the Texans to 36 yards rushing. The 49ers take pride in their running game but they had just 96 on the ground last week at New Orleans.

Betting on the NFL?

Tagovailoa had one of his lower quarterback ratings of the season last week (96.9), he was sacked four times and yet the Dolphins still put 30 points on the scoreboard. That was against the Texans’ sub-par defense with a huge step up in class this week.

The Dolphins speedy wideout duo of Hill and Waddle should neutralize the 49ers talented cornerbacks in Charvarius Ward and Deommodore Lenoir. Even an accurate passer like the Chargers’ Herbert was held in check by the 49ers so Tagovailoa has work to do.

The Dolphins don’t exactly have a feared rushing attack at 94.8 yards per game but could have a wild card to play Sunday with the return of Raheem Mostert from a knee injury after he missed last week’s win. Mostert played the previous six seasons with the 49ers.

Dolphins vs. 49ers pick: Dolphins over 20.5 points at -115 with Caesars Sportsbook

Odds courtesy of Caesars Sportsbook. Correct at time of publishing and subject to change.