A coyote ambushed a California family's 2-year-old daughter outside their Los Angeles home Friday, dragging her across the lawn before her father charged at the animal and scared it away.

The girl sustained non-life-threatening injuries and was treated in the emergency room, where she also received the rabies vaccine, the family said.

Shira Eliyahuo, the girl’s mother, told KTLA that her daughter suffered from scratches and some bruising.

"She has a lot of scratches on her left leg and one of them is really deep," her mother said.

She added: "The coyote just kind of dragged her, so her face is also a little bit bruised."

The incident, which happened at approximately 3:42 p.m. on Friday, was recorded by the family's Ring home surveillance system.

In the video, Ariel Eliyahuo can be seen removing his daughter from her car seat and setting her next to the vehicle as he turns back to reach for something in the SUV.

Then the animal struck.

The coyote leaps at the girl and drags her several feet away, across the driveway and onto the sidewalk. The girl is facedown on the concrete.

The father responds to the commotion, running after the girl and securing her in his arms. He then throws what appears to be a water bottle at the coyote, causing it to run off.

After carrying the toddler into the home, the father exits welding a piece of wood, and appears to look for and pursue the creature. 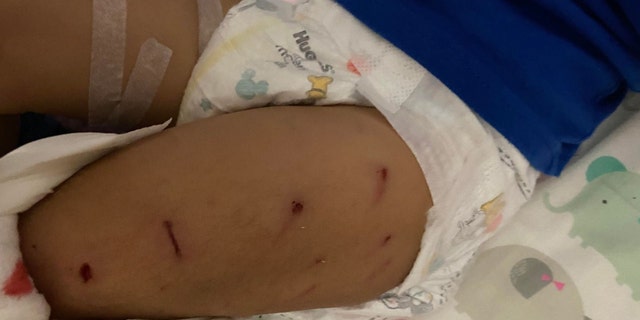 Mother Shira Eliyahuo and father Ariel say their daughter suffered scratches and was treated in an emergency room after she was attacked by a coyote on Dec. 2, 2022.  (Ariel Eliyahuo )

The entire incident is over within a few seconds.

The family had just arrived home from her preschool, the parents said.

Coyotes are prevalent in Los Angeles, though human attacks are not common.

Fox News' Sarah Rumpf and The Associated Press contributed to this report.

Eric Adams ‘slept like a baby’ at NYC migrant shelter, despite ‘agitators’

The best months to invest in gold

SpaceX put a Tesla sportscar into space five years ago. Where is it now?

Best deals at Walmart this week ahead of Valentine's Day 2023: Apple, Dyson, Vizio TVs and more

Chris Harrison Claims He Was Ready to Leave ‘The Bachelor’, Says Kaitlyn Bristowe And Tayshia Adams Were “Doomed To Fail” As Hosts

Viola Davis joined these EGOT winners at the 2023 Grammy Awards

Americans have low confidence in leaders, GOP at risk in political disputes: POLL

The remote workers have left, but the housing havoc they created remains