As Hurricane Ian roared towards Florida, it experienced a phenomenon known as rapid intensification — getting very strong, very fast. Scientists say the process of hurricanes rapidly intensifying is becoming more frequent, and is connected to the impact of human-caused climate change.

Early Tuesday morning Hurricane Ian intensified into a major Category 3 storm, packing sustained winds of around 125 mph, before hitting western Cuba. The hurricane was expected to continue strengthening as it passed over the warm waters of the Gulf of Mexico on the way to Florida's west coast. Some forecasters warned Ian could reach a Category 4, with top winds of around 140 mph, before making landfall in Florida on Wednesday.

What is rapid intensification?

Rapid intensification is defined by meteorologists as increase in the maximum sustained winds of a tropical cyclone of at least 30 knots (about 35 mph) in a 24 hour period, according to the U.S. National Hurricane Center. 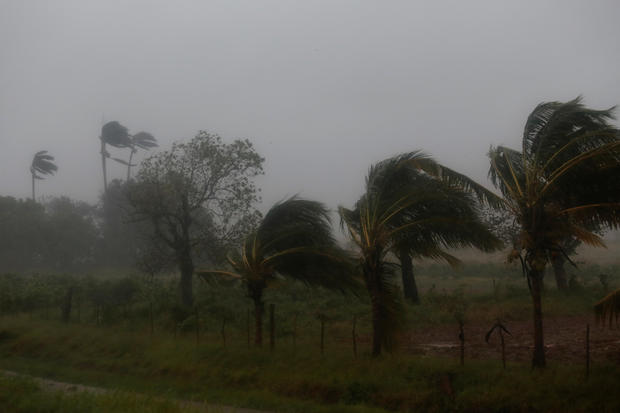 "Rapid intensification happens when a tropical cyclone that already has some organization moves over very warm water and within an atmospheric environment of calm surrounding conditions and a moist, unstable air mass," Knabb said. "All of these factors were clearly in play before the rapid intensification of Ian, which is why rapid intensification was anticipated fairly far in advance. Not every storm that encounters these conditions strengthens, sometimes due to internal structural changes that are hard to anticipate, but Ian did."

He said  the rapid intensification of Hurricane Ian was well anticipated for several days as forecasts have gotten more skillful in recent years, but it still remains a challenging forecast problem.

"Historically, rapid intensification is difficult to predict, and it is especially problematic when it happens just prior to landfall," Knabb said. "Watches and warnings for the various hurricane hazards — winds, storm surge and inland flooding — account for the possibility that a storm will be stronger than forecast."

What are the signs of rapid intensification in Hurricane Ian?

Knabb tells CBS News that Hurricane Ian packed two days' worth of rapid intensification into less than 36 hours, as it went from a 45 mph tropical storm on Sunday evening to a 115 mph Category 3 hurricane early Tuesday.

And that's not all: further strengthening is forecast prior to the hurricane making landfall on the west coast of the Florida peninsula because strong upper-level winds that would usually weaken the storm are not expected to affect it in time.

"Ian has unfortunately taken advantage of warmer-than-average waters of the northwestern Caribbean and southeastern Gulf of Mexico to rapidly intensify during the past couple of days," Knabb said. "Both hurricane hunter aircraft and satellite imagery are used to determine the intensity of what is now a major hurricane on the wind scale."

What role does climate change play in intensification?

Experts at NOAA, the National Oceanographic and Atmospheric Administration, explain that climate change is a factor in hurricane intensification because warmer ocean water fuels stronger storms.

"Warming sea-surface temperatures are playing a role, since they provide fuel for hurricanes, which also rely on a moist and unstable atmosphere — all of which are becoming more conducive for strengthening hurricanes in our changing climate," Knabb said. "Hurricanes appear to be peaking in strength a bit higher than they used to, and they seem to be intensifying at a rapid rate a bit more frequently. We do not appear to be seeing more tropical storms and hurricanes overall, but the proportion of storms that become majors and that peak a bit stronger appears to be what is increasing."

Climate change is likely also contributing to hurricanes moving more slowly, increasing the duration of winds, storm surge and rainfall that leads to flooding near the coast as well as inland.

"This has recently resulted in tropical storms and hurricanes having major water impacts, even without being a major hurricane — Category 3 or stronger — on the wind scale," Knabb said. "In addition, sea level rise will only continue to increase the magnitude and inland extent of flooding already caused by storm surge, when saltwater is pushed onto normally dry ground from the Gulf of Mexico or Atlantic Ocean."

Knabb says Hurricane Ian is a prime example of a dangerous slow-moving storm that could cause damaging winds in some locations for up to two days, and rain-induced flooding combined with storm surge in coastal areas could force many people from their homes.

Microsoft could soon have its first union

Chris Christie’s niece shouted ‘do you know who I am?’ during violent plane meltdown

’Call Jane’s’ Abortion Scene Gets Right What ‘Blonde’ Got Wrong

2022 FIFA World Cup: How to stream the England vs. France quarterfinals game

2022 FIFA World Cup: How to stream the Netherlands vs. Argentina quarterfinals game

Gunfire that cut power to a North Carolina county was a selfish and cruel act that has hurt thousands, mayor says

Drew Barrymore’s Reaction to ‘Grow Old With You’ in ‘The Wedding Singer’ Was Real, Adam Sandler Says He “Wasn’t Allowed” to Sing It to Her Sooner

Walmart holiday deal: Outfit an entire kitchen for $99 with this 4.9-star-rated The Pioneer Woman cookware deal

Aaron Judge’s Yankees frustration comes out during free agency: ‘Turn the fans against me’

Heather Gay flirts with ‘Below Deck Adventure’ crew: ‘Take your shirts off!’

IN judge confirmed to 7th Circuit by Senate

22 unique Christmas gift ideas for everyone on your 2022 list

Christmas 2022 live blog: The best holiday deals you can get on gifts, decorations and more, plus the best Christmas movies

Here’s Why Curse Words Sound the Way They Do

Manage your holiday stress with a subscription to this mindfulness app

The Forgotten Story of One of the First U.S. Soldiers Killed Overseas After Pearl Harbor

Kirstie Alley was diagnosed with colon cancer before death

Kirstie Alley cause of death revealed: ‘Was only recently discovered’

John Travolta Mourns Death of ‘Look Who’s Talking’ Co-Star Kirstie Alley: “One of the Most Special Relationships I’ve Had”

Will Harry and Meghan's docuseries force Britain to confront racism?

2022’s Most Punchable TV Characters, From Stephen on ‘Tell Me Lies’ to JP on ‘Bad Sisters’

What Time Will ‘Chainsaw Man’ Episode 9 Arrive on Hulu and Crunchyroll?

Made money online this year? You could owe more in taxes

Even with Justin Verlander, it’s who the Mets add to their rotation next that could make or break 2023

8 killed in Mexican resort, including 5 in bar shooting

What to expect in Herschel Walker-Raphael Warnock Georgia Senate runoff

How to scrub yourself off the internet

How to keep your Amazon gift purchases a secret

FBI: Fugitive caught after 9 years but wife, another man still at large

It's still not clear what transpired at FTX. These senators are demanding answers.

Sen. Warren demands answers from Silvergate Bank about its business dealings with FTX