It’s almost comical the way the liberal media at large falls back on two narratives when confronting stories that hurt Democrats:

It happened the first time around with the Hunter Biden laptop story. When The Post published stories about Hunter introducing partners and foreign agents to then-Vice President Joe, who swore up and down he “never discussed” business with his son, they either insulted us, claimed falsely it was “Russian disinformation” or bought the campaign line that these stories were “long discredited.”

Now it’s happening again, after internal Twitter documents were revealed through reporter Matt Taibbi. In almost lockstep, journalists are bashing Taibbi, who has a long history of campaigning journalism and colorful prose. He’s the man who called Goldman Sachs “a great vampire squid wrapped around the face of humanity.” The typical comment came from Ben Collins, who tweeted, “Imagine throwing it all away to do PR work for the richest person in the world. Humiliating s–t.” Which is rich considering NBC has a reputation of taking whatever the bureaucrats of the Justice Department or FBI tell them and printing it without question. Rather than focus on the relevant questions — are the documents on the laptop authentic (2020), are the Twitter messages real (2022) — reporters resort to ad hominem dismissals. 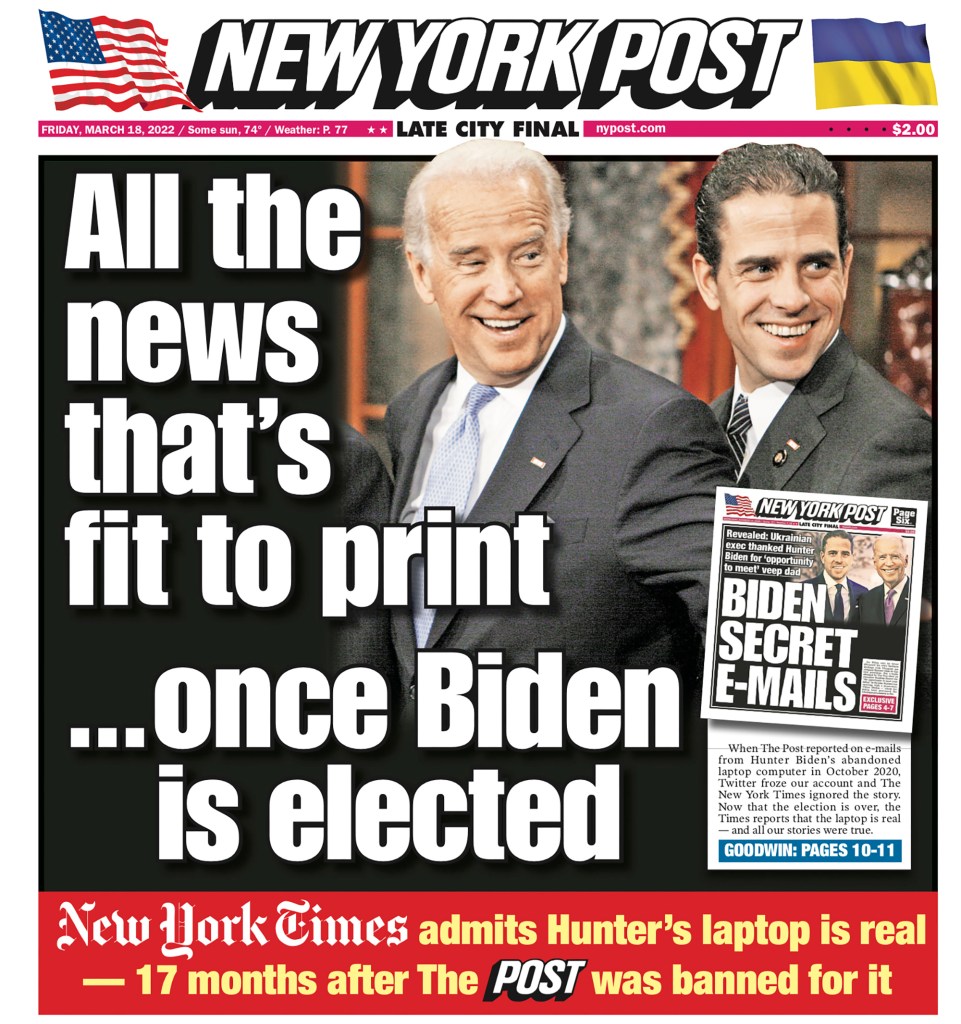 When they weren’t attacking Taibbi for writing an interesting story, they were claiming the Twitter files are a bust. The messages “show content moderators moderating content,” one observer noted. No, what they show is that a small group of people with a liberal bias were quick to censor a piece of news embarrassing to Joe Biden without having any reason to do so. The explanation they threw out was “hacked materials” even though the story clearly said where the laptop came from and they had no evidence it was hacked. What journalists forget is that the owner of the Apple repair store spoke to other media outlets one day after we published — and confirmed he had gotten the laptop. Hunter’s business partner, Tony Bobulinski, came forward two days later and confirmed the emails between him and Hunter, and a meeting with Joe Biden. Twitter still wouldn’t uncensor our story.

If the political parties were reversed, if messages revealed that a story about Donald Trump and his children was censored, and that Twitter had no reason for doing so, the press would be screaming “election interference!”

Instead, The New York Times and Washington Post have printed not one word about the files. Apparently the collision of a president’s son, political pressure and social media is unworthy of attention.

Imagine throwing away a history of objective journalism to do p.r. work for one political party. Humiliating s–t.

A guide for Super Bowl betting and the wild world of prop bets, from TD totals to the Gatorade shower