Senate Majority Leader Mitch McConnell on Tuesday announced he'll "proudly" support bipartisan legislation in the Senate to reform the Electoral Count Act, a move intended to prevent a recurrence of the events of Jan. 6, 2021.

A similar effort passed in the House last week. Eleven Senate Republicans have already announced they are co-sponsoring the measure, more than enough for passage. The Senate Rules Committee on Tuesday voted to advance the bill, with GOP Sen. Ted Cruz being the only committee member to object.

"I strongly support the modest changes that our colleagues in the working group have fleshed out after literally months of detailed discussions," McConnell said on the Senate floor Tuesday afternoon. I'll proudly support the legislation, provided that nothing more than technical changes are made to its current form." 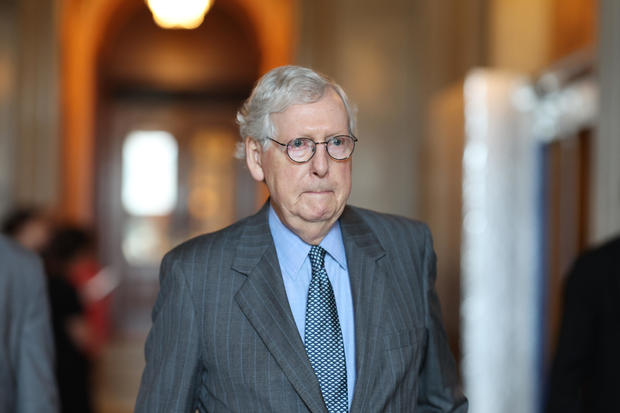 Senate Minority Leader Mitch McConnell (R-KY) walks to a luncheon in the U.S. Capitol on July 21, 2022 in Washington, DC. The Senate wrapped up their votes for the week and is expected to consider legislation for legalizing marijuana and the House-approved bill protecting same-sex marriage. Anna Moneymaker / Getty Images

"Our bipartisan bill is backed by election law experts and organizations across the ideological spectrum and a broad cross section of Senators from both parties," Collins and Manchin said in a statement Tuesday. "We will keep working to increase support for our legislation that would correct the flaws in this archaic and ambiguous law."

The legislation would reform and modernize the Electoral Count Act of 1887 to make sure electoral votes counted by Congress accurately reflect each state's vote for president, something the House bill also does. It also provides clearer guidelines for when eligible candidates for president and vice president can receive federal resources to support their transition to governance.

The General Services Administration was in the spotlight during the last presidential transition, as the Trump-picked GSA administrator was responsible for allowing President-elect Biden access to office space, key funding and classified intelligence briefings.

Last week, the House passed the Presidential Election Reform Act, which makes sure Congress receives an electoral certificate from each state that accurately reflects the will of the voters and reaffirms that the vice president's role in approving electoral votes is merely ministerial.

A January 2022 CBS News poll found that 75% of respondents believe Congress must accept the results after states certify their election results, while 25% believe Congress can accept or reject those results.

— Jack Turman contributed to this report

Kathryn Watson is a politics reporter for CBS News Digital based in Washington, D.C.

What is stiff person syndrome? Diagnosis, symptoms and treatment

MTA worker sues NYC after he was struck by train, lost part of one leg and shattered other

Outside review of documents seized at Mar-a-Lago officially ends