Everyone in the Yankees’ orbit seems to be tired of waiting for No. 61.

Aaron Judge walked four times in five trips to the plate in a 5-2 win over the Blue Jays on Tuesday that clinched the AL East. He remains stuck on 60 home runs, one behind Roger Maris’ franchise and American League mark.

Judge’s mother, Patty, who was seated in the front row at the Rogers Centre in Toronto — right next to Roger Maris, Jr. — shook her head as she gave her son some encouragement after his fourth walk of the night. 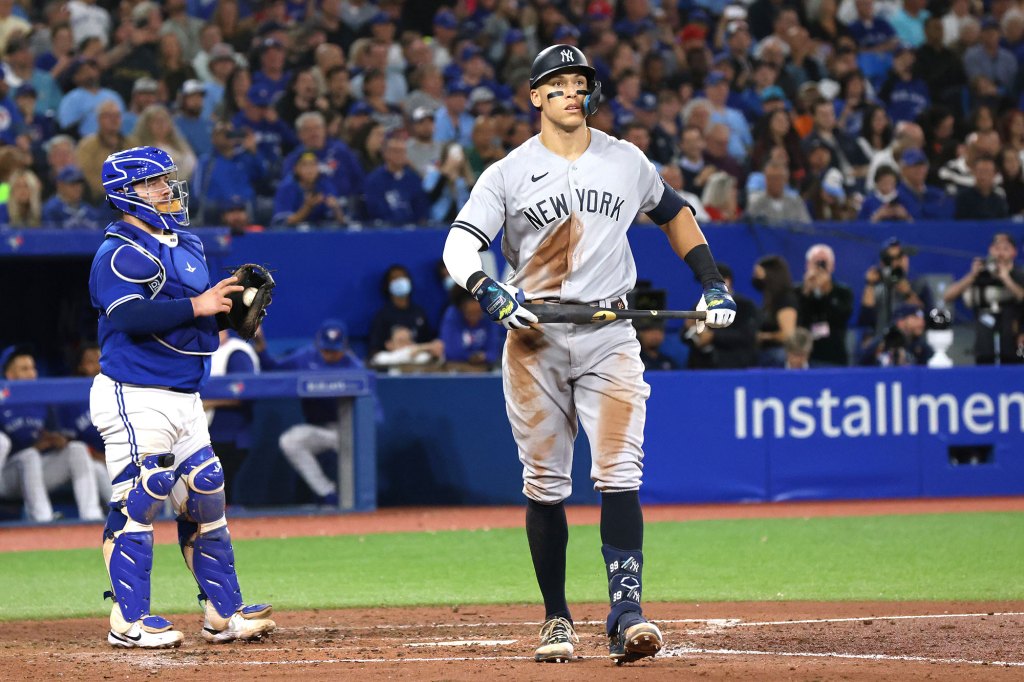 “Good job, baby!” she said, while clapping. The Judge matriarch has had little else to do as she’s become a staple at his games with Maris Jr. On Monday, cameras caught her shaking her head as the Blue Jays intentionally walked her son in a 2-2 game in the 10th inning.

She was not alone in her continued frustration.

Yankees hurler Nestor Cortes fashioned himself a rally cap in the dugout on Tuesday, only to frustratedly set his cap back atop of his head as Judge trotted to first.

It’s not as if the Blue Jays pitchers avoided pitching to the Yankees slugger — he saw five full counts on the night, bringing his league-leading total to 140 on the season — though he did see mostly breaking pitches.

Judge has eight more games to slug No. 61 and then set a new Yankees’ mark. The Yankees have one more in Toronto on Wednesday before returning home for a three-game set with the Orioles starting Friday, and then head to Arlington to close out the regular season with four against the Texas Rangers.

All about Emface, the treatment getting Jessica Simpson ‘camera-ready’

Stream It Or Skip It: ‘Harry & Meghan’ on Netflix, In Which The Royals Offer Unprecedented Access To And Surprising Revelations About Their Life

Iran carries out first execution by hanging over protests

WHO: COVID-19 Sets Back Global Malaria Efforts, Especially in Africa

I got ‘dress-coded’ over my ‘inappropriate’ top: ‘Disney doesn’t like backs’

Biden says Russia treating Paul Whelan case differently for 'illegitimate reasons': 'We are not giving up'

As more in North Carolina regain power, investigators probe domestic terrorism and threats against power infrastructure across the US

Christina Applegate reveals how she got MS diagnosis: It ‘sucked balls’

Who is the Russian arms dealer known as the 'Merchant of Death' that the U.S. exchanged for Brittney Griner?

Ilya Sorokin has gotten the Islanders this far, but here’s what they need to change to actually make a playoff run

Yellen to unveil first U.S. currency with her signature

How Eastern Conference parity has opened a door for the Knicks

WNBA star Brittney Griner released from Russian custody in a high-profile prisoner swap between the U.S. and Moscow

What we learned from Harry and Meghan's Netflix documentary

The Leaders Financing the Planet’s Future

China's Xi gets a warm welcome from MBS in Riyadh

Aaron Judge’s return is good for him, for the Yankees and for baseball. Too bad for everyone else

Meghan, Harry give glimpse into ex-royal life with never-before-seen photos

Prince Harry calls Nazi uniform one of the ‘biggest mistakes’ of his life: I was ‘so ashamed’

Harry and Meghan open up about media, race and romance in Netfix series