As Hurricane Ian made its way toward Florida on Wednesday, it appeared water had receded from Tampa Bay, as if the body of water had been drained and dried out. The phenomenon, called a blowout tide or a reverse storm surge, is an indicator that a hurricane is on its way.

A blowout tide often occurs during low tide, when strong winds blowing directly off shore push the water out, exposing the bottom of the body of water, according to The Weather Channel.

Walking on the newly exposed shore during blowout tide could be dangerous because the winds could rapidly change, and the tide could come back. 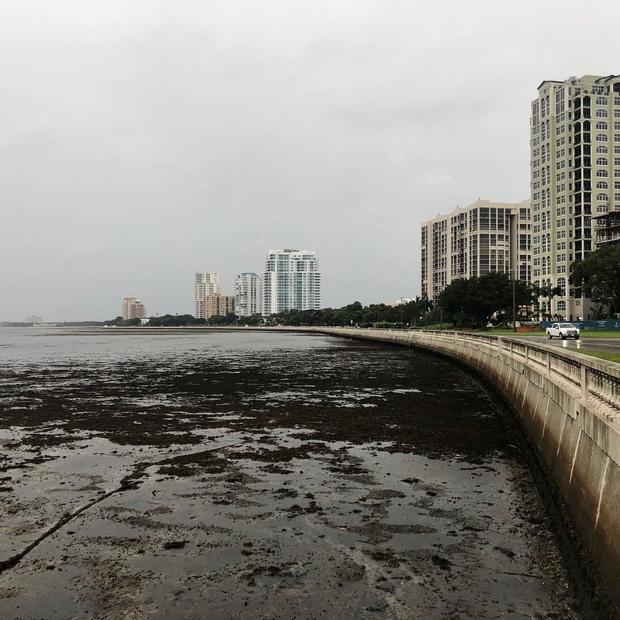 Images show the body of water looked like it had been drained. But as Hurricane Ian approaches, a storm surge can make the tide rapidly rise. Tampa Police Department

Several agencies in Tampa shared images of the blowout tide around the bay on Wednesday, and the National Weather Service Tampa warned residents to not walk to any location with receding water.

The opposite of blowout tide is coastal flooding, where direct onshore wind pushes water inland, often during high tide, according to the Weather Channel.

During coastal flooding, also called storm surges, the water level abnormally rapidly rises and is pushed toward the shore by the force of the winds swirling around the hurricane. This, combined with the normal tides, can increase the water level by 30 feet or more.

A model called SLOSH – Sea, Lake and Overland Surges from Hurricanes – is used to predict how high the storm surge will be, according to NOAA. Evaluating on the hurricane's track, intensity, and size as well as the water depths, land elevations and barriers helps determine the size of the surge as it moves inland.

Storm surges can kill people. During Hurricane Katrina in 2005, at least 1,500 people died, and many of those deaths occurred as a result of a storm surge, either directly or indirectly, according to NOAA.

Many impacts from #HurricaneIan are being felt across the area!!

Early Wednesday, Ian was a Category 4 storm with 155 mph winds — just shy of a Category 5 hurricane, which has winds of 157 mph or higher. The storm then made landfall in southwest Florida on Wednesday afternoon with maximum sustained winds of 150 mph.

The National Hurricane Center warned that "Ian will cause catastrophic storm surge, winds, and flooding in the Florida peninsula" and NWS Tampa Bay said that storm surge was ongoing in southwest Florida and residents should shelter in place.

Millions of Florida residents were under an evacuation notice as Hurricane Ian approached. FEMA urged people to avoid water – do not attempt to walk or drive through it, as just a few inches of water can carry a vehicle away. Those in areas with rising water levels should seek higher ground.

Caitlin O'Kane is a digital content producer covering trending stories for CBS News and its good news brand, The Uplift.