(ZENIT News / Vatican City, 21.09.2022).- The General Audience of Wednesday, September 21, was held at 9:00 am in Saint Peter’s Square, where the Holy Father Francis met with groups of pilgrims and faithful from Italy and from all over the world. In his address in Italian, the Pope focused his meditation on his recent journey to Kazakhstan, on the occasion of the 7th Congress of Leaders of the World and Traditional Religions, which he described as an opportunity to listen and respect and not as a congress of relativism.

After summarizing his catechesis in several languages, the Holy Father expressed special greeting to the faithful present. Then he made an appeal on the occasion of World Alzheimer’s Day, being held that day, and a second appeal for the situation in “tormented Ukraine,” asking for prayer and closeness to the Ukrainian people. 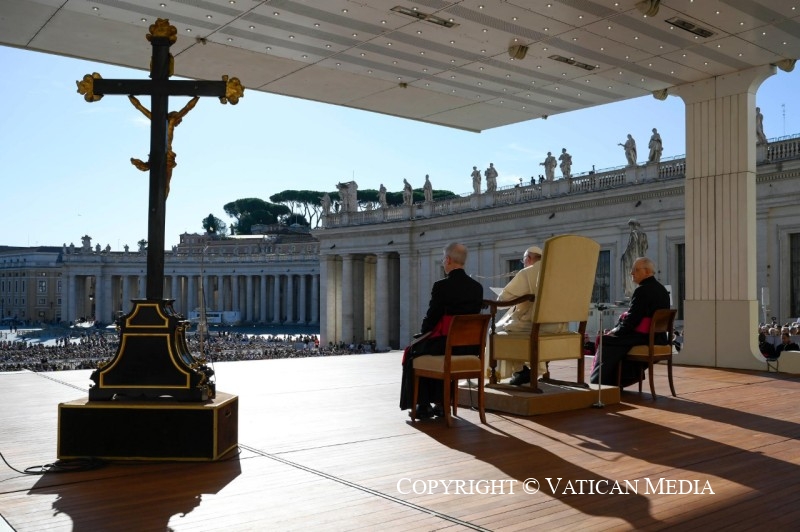 The General Audience ended with the praying of the Pater Noster and the Apostolic Blessing.

Here is the text of the address in English.

Last week, from Tuesday to Thursday, I travelled to Kazakhstan, a vast country in Central Asia, for the Seventh Congress of Leaders of the World and Traditional Religions. I renew my gratitude to the President of the Republic and the other Authorities of Kazakhstan for the cordial welcome I was given and for the generous efforts in organizing it. I also sincerely thank the Bishops and all the collaborators for the great work they have done, and especially for the joy they have given me in being able to meet and see them all together.

As I said, the main reason for the trip was to take part in the Congress of Leaders of World and Traditional Religions. This initiative has been carried out for 20 years by the Authorities of the country, which presents itself to the world as a place of meeting and dialogue, in this case at the religious level, and thus as a leading player in promoting peace and human brotherhood. It was the seventh edition of this congress. A country that has been independent for 30 years has already had seven editions of these congresses, one every three years. This means putting religions at the center of efforts to build a world where we listen to each other and respect each other in diversity. And this is not relativism, no, it is listening and respecting. And credit for this must be given to the Kazakh government, which, having freed itself from the yoke of the atheistic regime, now proposes a path of civilization, clearly condemning fundamentalism and extremism. It is a balanced position and one of unity. 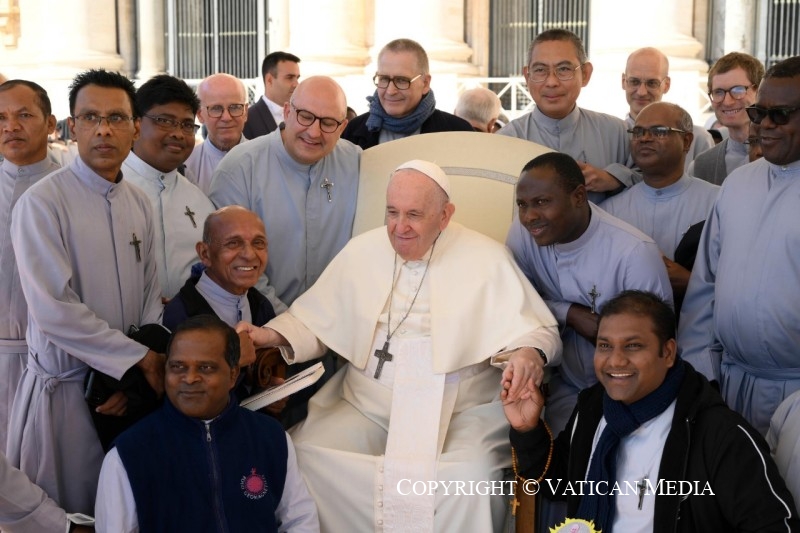 The Congress discussed and approved the Final Declaration, which stands in continuity with the one signed in Abu Dhabi in February 2019 on human fraternity. I like to interpret this step forward as the fruit of a journey that starts from afar: I am thinking, of course, of the historic Interfaith Meeting for Peace convened by St. John Paul II in Assisi in 1986, much criticized by people who lacked vision; I am thinking of the far-sighted gaze of St. John XXIII and St. Paul VI; and also that of great souls of other religions – I limit myself to recalling Mahatma Gandhi. But how can we not remember so many martyrs, men and women of all ages, languages and nations, who paid with their lives for their fidelity to the God of peace and fraternity? We know: solemn moments are important, but then it is the daily commitment, it is the concrete witness that builds a better world for all.

In addition to the Congress, this trip gave me the opportunity to meet the Authorities of Kazakhstan and the Church living there. 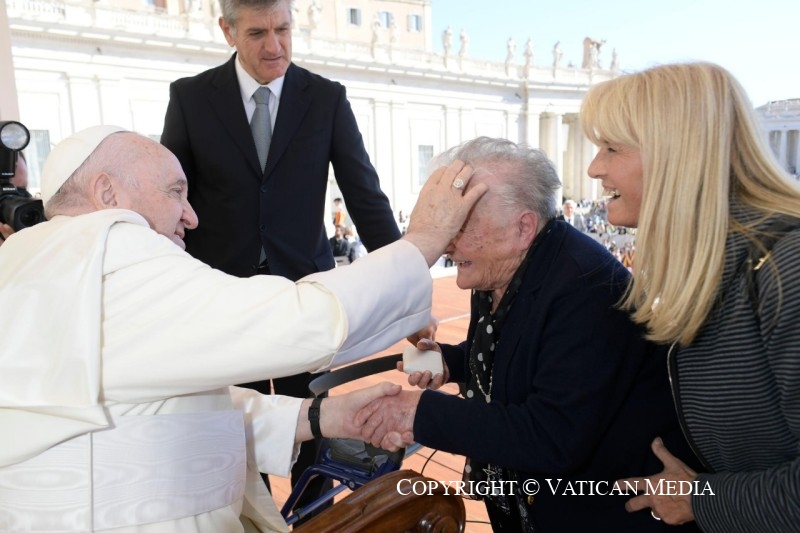 After visiting the President of the Republic – who I thank again for his kindness – we went to the new Concert Hall, where I was able to speak to the political Leaders, representatives of civil society, and the Diplomatic Corps. I emphasized Kazakhstan’s vocation to be a country of encounter: in fact, about one hundred and fifty ethnic groups – one hundred and fifty ethnic groups! – coexist there and more than eighty languages are spoken. This vocation, which is due to its geographical characteristics and history – this vocation of being a country of encounter, of culture, of language – has been welcomed and embraced as a path, which deserves to be encouraged and supported. I hoped as well that the construction of an increasingly mature democracy, capable of effectively responding to the needs of society as a whole, could continue. This is an arduous task, which takes time, but already it must be acknowledged that Kazakhstan has made very positive choices, such as saying “no” to nuclear weapons and making good energy and environmental policies. This was courageous. At a time when this tragic war brings us to the point where some people are thinking of nuclear weapons, that madness, this country says “no” to nuclear weapons from the very beginning

As for the Church, I was so glad to meet a community of happy, joyful people filled with enthusiasm. Catholics are few in that vast country. But this condition, if lived with faith, can bring evangelical fruits: first of all, the blessedness of littleness, of being leaven, salt, and light relying solely on the Lord and not on some form of human relevance. Moreover, numerical scarcity invites the development of relationships with Christians of other denominations, and also fraternity with all. So a small flock, yes, but open, not closed, not defensive, open and trusting in the action of the Holy Spirit, who blows freely where and how He wills. We also remembered that grey part, the martys, the martyrs of that holy People of God, because they suffered decades of atheistic oppression, until liberation thirty years ago, men and women who suffered so much for the faith during the long period of persecution. Murdered, tortured, imprisoned for the faith. 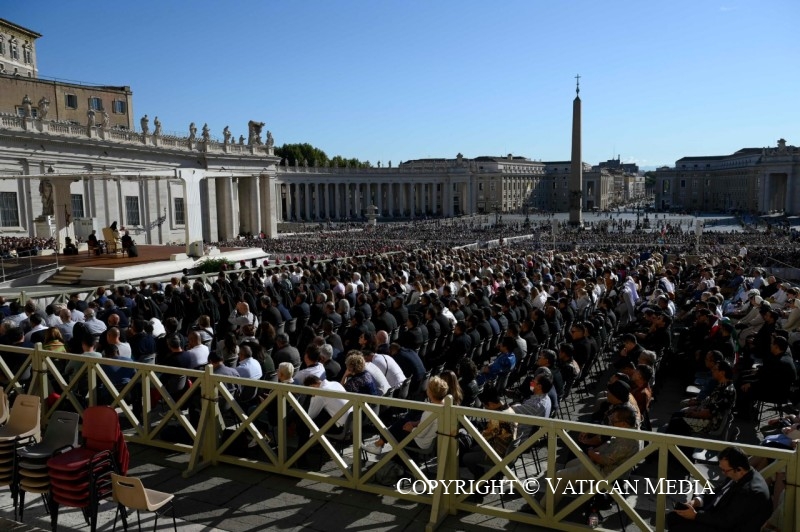 With this small but joyful flock, we celebrated the Eucharist, also at Nur Sultan, in the Expo 2017 plaza, surrounded by ultra-modern architecture. It was the feast of the Holy Cross. And this leads us to reflect: in a world in which progress and regression are intertwined, the Cross of Christ remains the anchor of salvation: a sign of hope that does not disappoint because it is founded on the love of God, merciful and faithful. Our gratitude goes out to Him for this journey, as does our prayer that it will be rich in fruit for the future of Kazakhstan and for the life of the pilgrim Church in that land. Thank you.