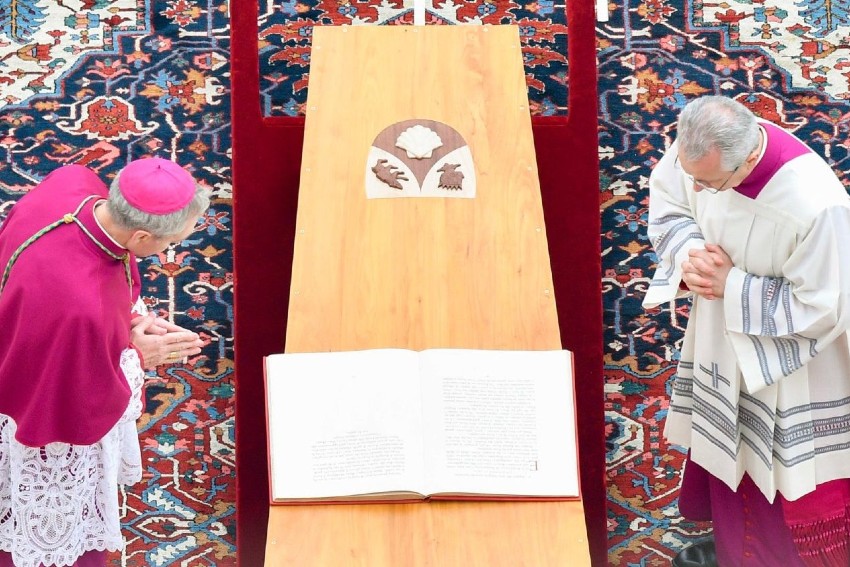 Here below is a text which was placed in the coffin of Pope Emeritus Benedict XVI, summing up his life and deeds for posterity.

I make only one comment, which has two parts (and this is certainly not all that might be said about this document)

The summary leaves out all hint of struggle, difficulty, controversy, except for the fact that it does mention two difficulties:

(2) the difficulties of the modern sexual abuse crisis in the priesthood, which he had to face and deal with.

Here are two quotes from this text which deal with these difficulties:

(1) “The period of his youth was not easy. His faith and family upbringing prepared him for the harsh experience of the problems connected with the Nazi regime, aware of the climate of strong hostility towards the Catholic Church in Germany. In this complex situation, he discovered the beauty and truth of faith in Christ.”

(2) “He resolutely fought against crimes committed by clergy against minors or vulnerable people, constantly calling the Church to conversion, prayer, penance and purification.” —RM

Note: In the video which you can see by clicking on the image below, I speak for a few minutes about this text, followed by the actual text. Again, any comment, correction, or suggestion is welcome.

As the late Pope Emeritus Benedict XVI is laid to rest, the Holy See Press Office publishes the text of the Deed placed in his coffin, which recounts his biography for posterity.

The coffin of the late Pope Emeritus Benedict XVI was sealed in a ritual in St. Peter’s Basilica on Wednesday evening, after around 200,000 pilgrims had finished paying their respects to the German-born Pope.

As per tradition, the Pope Emeritus’ pallium, coins and medals minted during his pontificate, as well as a “Rogito” or Deed summarizing the highlights of his papacy, were also placed inside the casket.

Following the Requiem Mass on Thursday, Pope Emeritus Benedict XVI’s coffin was transported through the Basilica and to the Vatican crypt for burial, in the first tomb of John Paul II.

He was buried in the traditional triple coffin, with caskets made of cypress wood, zinc, and oak.

Ahead of the Requiem Mass, the Holy See Press Office published the full text of the Deed, written in Latin and sealed inside a metal cylinder.

The following is an English-language translation of the Deed:

DEED FOR THE PIOUS TRANSIT

“The death, deposition and burial

In the light of Christ risen from the dead, on 31 December in the year of our Lord 2022, at 9.34 a.m., as the year came to an end and we were ready to sing the Te Deum for the many benefits granted by the Lord, the beloved Pastor emeritus of the Church, Benedict XVI, departed from this world for the Father. The whole Church together with the Holy Father Francis accompanied his passing transfer with prayers.

Benedict XVI was the 265th Pope. His memory lives on in the heart of the Church and of all humanity.

Joseph Aloisius Ratzinger, elected Pope on 19 April 2005, was born on 16 April 1927 in Marktl am Inn, in the Diocese of Passau (Germany). His father was a police commissioner and came from a family of farmers from Lower Bavaria, of modest economic resources. His mother was the daughter of artisans from Rimsting on the shore of Lake Chiem, and before marrying she worked as a cook in a number of hotels.

He spent his childhood and adolescent years in Traunstein, a small town near the Austrian border, about thirty kilometres from Salzburg, it was in this context where he received his Christian, human and cultural education.

The period of his youth was not easy. His faith and family upbringing prepared him for the harsh experience of the problems connected with the Nazi regime, aware of the climate of strong hostility towards the Catholic Church in Germany. In this complex situation, he discovered the beauty and truth of faith in Christ.

From 1946 to 1951 he studied at Higher School of Philosophy and Theology of Freising and at the University of Munich. On 29 June 1951 he was ordained a priest, and the following year began teaching at the same Higher School of Freising. He was subsequently a lecturer in Bonn, Münster, Tübingen and Regensburg.

In 1962 he became an official expert of Vatican Council II, as an assistant to Cardinal Joseph Frings. On 24 March 1977 Pope Paul VI appointed him Archbishop of München und Freising, and he received episcopal ordination on 28 May of the same year. He chose as his episcopal motto: “Cooperatores Veritatis”.

He was created a Cardinal by Pope Montini, with the Title of Santa Maria Consolatrice al Tiburtino, in the Consistory of 27 June 1977.

On 25 November 1981, John Paul II appointed him Prefect of the Congregation for the Doctrine of the Faith; and on 15 February of the following year he resigned from the pastoral office of the Archdiocese of München und Freising.

On 6 November 1998 he was appointed Vice-Dean of the College of Cardinals and on 30 November 2002 he become Dean, taking possession of the Title of the Suburbicarian Church of Ostia.

On Friday 8 April 2005 he presided at the Funeral Mass of Pope John Paul II in Saint Peter’s Square.

He was elected Pope by the Cardinals gathered in the Conclave on 19 April 2005, and took the name of Benedict XVI. He presented himself from the Loggia of Blessings as a “humble labourer in the vineyard of the Lord”. On Sunday, 24 April 2005 he solemnly began his Petrine ministry.

Benedict XVI placed the theme of God and faith at the centre of his Pontificate, in a continuous search for the face of the Lord Jesus Christ and helping everyone to know Him, in particular through the publication of the three-volume work Jesus of Nazareth. Endowed with vast and profound biblical and theological knowledge, he had the extraordinary ability to formulate illuminating syntheses on the principal doctrinal and spiritual themes, as well as on crucial issues in the life of the Church and contemporary culture.

He successfully promoted dialogue with the Anglicans, with the Jews and with the representatives of other religions; he also resumed contact with the priests of the Society of Saint Pius X.

In the last General Audience of his Pontificate, on 27 February 2013, in thanking each and every person for the respect and understanding with which his decision had been accepted, he assured: “I will continue to accompany the Church’s journey with prayer and reflection, with that devotion to the Lord and his Bride which I have hitherto sought to practice daily and which I would like to practice always”.

After a brief stay in the residence in Castel Gandolfo, he lived the last years of his life in the Vatican, in the Mater Ecclesiae Monastery, devoting himself to prayer and meditation.

Benedict XVI’s doctrinal magisterium is summarized in the three Encyclicals Deus Caritas Est (25 December 2005), Spe Salvi (30 November 2007) and Caritas in Veritate (29 June 2009). He offered to the Church four Apostolic Exhortations, numerous Apostolic Constitutions and Apostolic Letters, as well as the Catecheses offered at the General Audiences and the allocutions, including those delivered during his twenty-four Apostolic Journeys around the world.

Faced with increasingly pervasive relativism and practical atheism, in 2010, with the motu proprio Ubicumque et Semper, he established the Pontifical Council for Promoting New Evangelization, to which he transferred competence in matters of catechesis in January 2013.

He resolutely fought against crimes committed by clergy against minors or vulnerable people, constantly calling the Church to conversion, prayer, penance and purification.

As a theologian of renowned authority, he left a rich heritage of studies and research on the fundamental truths of the faith.

HE LED THE UNIVERSAL CHURCH

May you live forever in Christ, Holy Father!

They were witnesses of the celebrations and the burial)