Pope at Audience: The elderly show us the tenderness of God 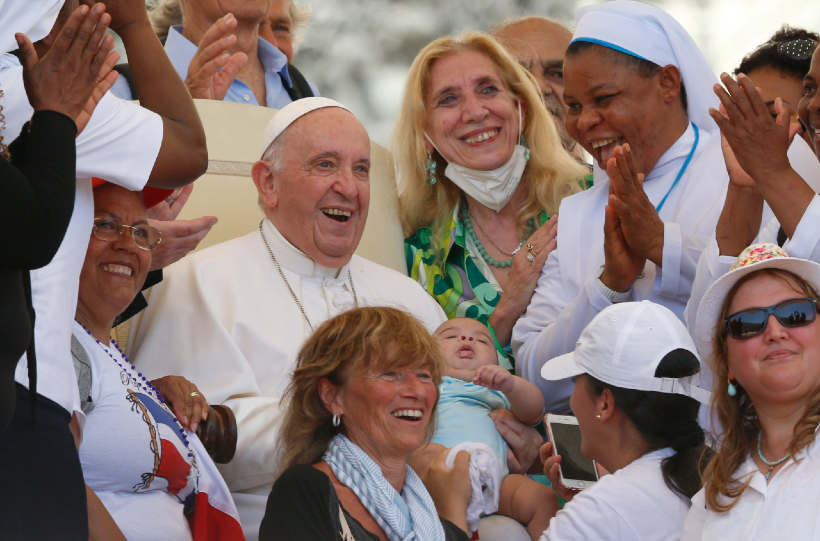 Continuing his catechesis on the value of the elderly and old age at the weekly General Audience, Pope Francis reflects on the Biblical figure of Nicodemus, and says the elderly are messengers of tenderness, wisdom and love.

Pope Francis stressed this during his Wednesday General Audience in St. Peter’s Square, as he continued his series of catechesis “on the meaning and value of old age in the light of God’s Word.” He reflected this week on the New Testament figure of Nicodemus.

The Pope said he wished to emphasize “the tenderness of the elderly” and grandparents, highlighting how God is equally tender with us.

“Watch how a grandfather or a grandmother look at their grandchildren, how they embrace their grandchildren – that tenderness, free of any human distress, that has conquered the trials of life and is able to give love freely, the loving nearness of one person to others.”

This tenderness, he said, opens the door toward understanding God’s tenderness.

“This is what God is like, He knows how to embrace. And old age helps us understand this aspect of God who is tenderness.”

The Pope considered the words spoken by Jesus to Nicodemus: “No one can see the kingdom of God without being born anew” (Jn

This spiritual rebirth, the Pope suggested, does not negate or detract from the value of our earthly existence, but “points it towards its ultimate fulfillment in the eternal life and joy of heaven.”

Our age, with its frantic pursuit of the myth of eternal youth, the Holy Father underscored, needs to relearn this truth and to see every age of life as preparation for the eternal happiness for which we were created.

Jesus had told Nicodemus: “God so loved the world that He gave His only Son, so that everyone who believes in Him may not perish, but may have eternal life.”

Witness to God’s presence in our midst

The elderly, through their faith, wisdom and experience, can bear convincing witness to the presence of God’s kingdom in our midst and the authentic meaning of our earthly existence as a foretaste of that true “eternal youth” which awaits us in the new creation inaugurated by Christ and his Holy Spirit.

The Holy Father highlighted the beauty of old age.

“Old age moves ahead toward its destination, towards God’s heaven,” he said.

“Old age, therefore, is a special time of separating the future from the illusion of a biological and robotic survival, especially because it opens us to the tenderness of God’s creative and generative womb.”

Pope Francis concluded by praying, “May the Spirit grant us the re-opening of this spiritual – and cultural – mission of old age that reconciles us with the birth from above.”

To Whom Are Condolences Offered When a Pope Dies and, Specifically, Benedict XVI?

Ratzinger and a Vision of Politics

Benedict XVI’s Last Words Before Dying: “Jesus, I Love You.” First Photos of the Deceased

From U.S. President Joe Biden to King Charles III of the United Kingdom: These Are the Condolences of International Leaders on the Death of Benedict XVI

This Is How Pope Francis Explains the Hail Mary’s “Holy Mary, Mother of God”

What Languages Does Mary Use to Speak to Us? Pope’s Inspiring Reflection at the Start of 2023