Mexican soccer star Javier ‘Chicharito’ Hernández a big draw at Soldier Field. ‘All the power to him,’ a fan said.

One might call it the Javier “Chicharito” Hernández effect.

Gonzalez always has supported the Fire but is also a longtime Chivas de Guadalajara supporter, the club that Hernández burst onto the scene as one of the most prolific goal scorers in Mexican soccer. “I feel like I’m getting ripped in half,” Gonzalez said. “But at the same time, you’ve got to do what you’ve got to do, right? I’m Chicago all the way until the day I die.”

More than a decade since he last donned a Chivas jersey, Hernández is one of the most famous Mexican soccer players ever, having scored 52 goals in 109 appearances for the national team while earning his place with top European clubs such as Manchester United, Real Madrid and Bayer Leverkusen.

The 33-year-old striker now stars for the Galaxy. When MLS scheduled the Galaxy for a trip to Chicago, thousands of Chicagoans and suburbanites in the Mexican community and beyond jumped at the chance to see the legend live.

One such fan, Juan Galacia, brought his entire family to Soldier Field. Every member of the family sported a Chicharito jersey, paying no mind to the fact the game was in an opposing team’s stadium.

“I’ll still follow him wherever,” Galicia said in Spanish with his daughter interpreting. “Even if we’re living in Illinois, we’ll still go for LA Galaxy.”

Galicia — who like Hernández hails from Guadalajara — was yearning for another moment of magic from his favorite striker. Miming his reaction to any Hernández goal, Galicia did a little jump, spread his arms up high and let out a practice yell of excitement.

“All jumping and screaming, that’s all we have to do,” Galacio said.

Hernández didn’t deliver Saturday night as the teams played to a scoreless draw in front of 30,282 fans — the fourth-largest crowd in club history, according to the Fire. 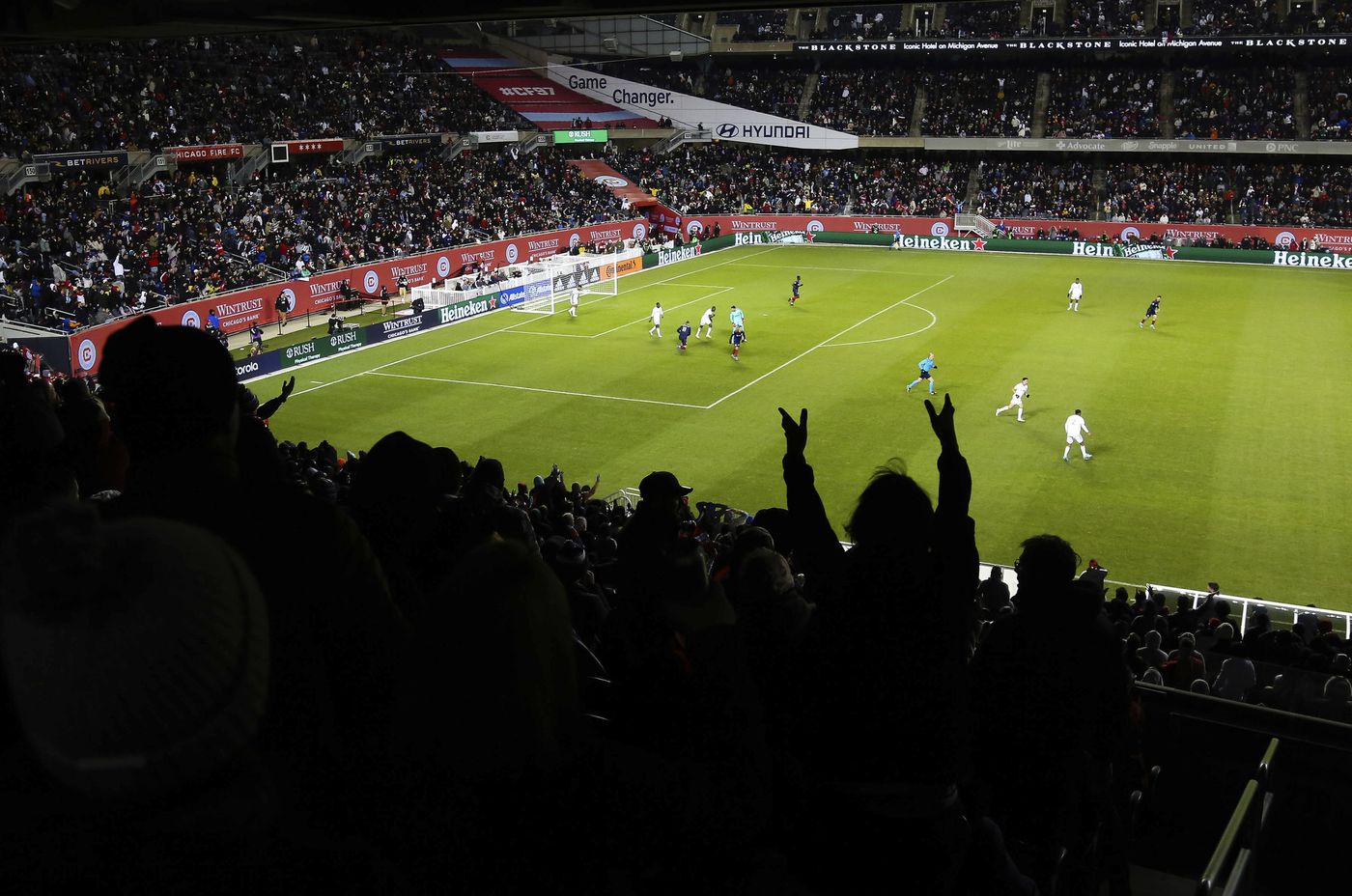 A fan reacts during the second half of the Fire-Galaxy match at Soldier Field on April 16, 2022. (Trent Sprague / Chicago Tribune) 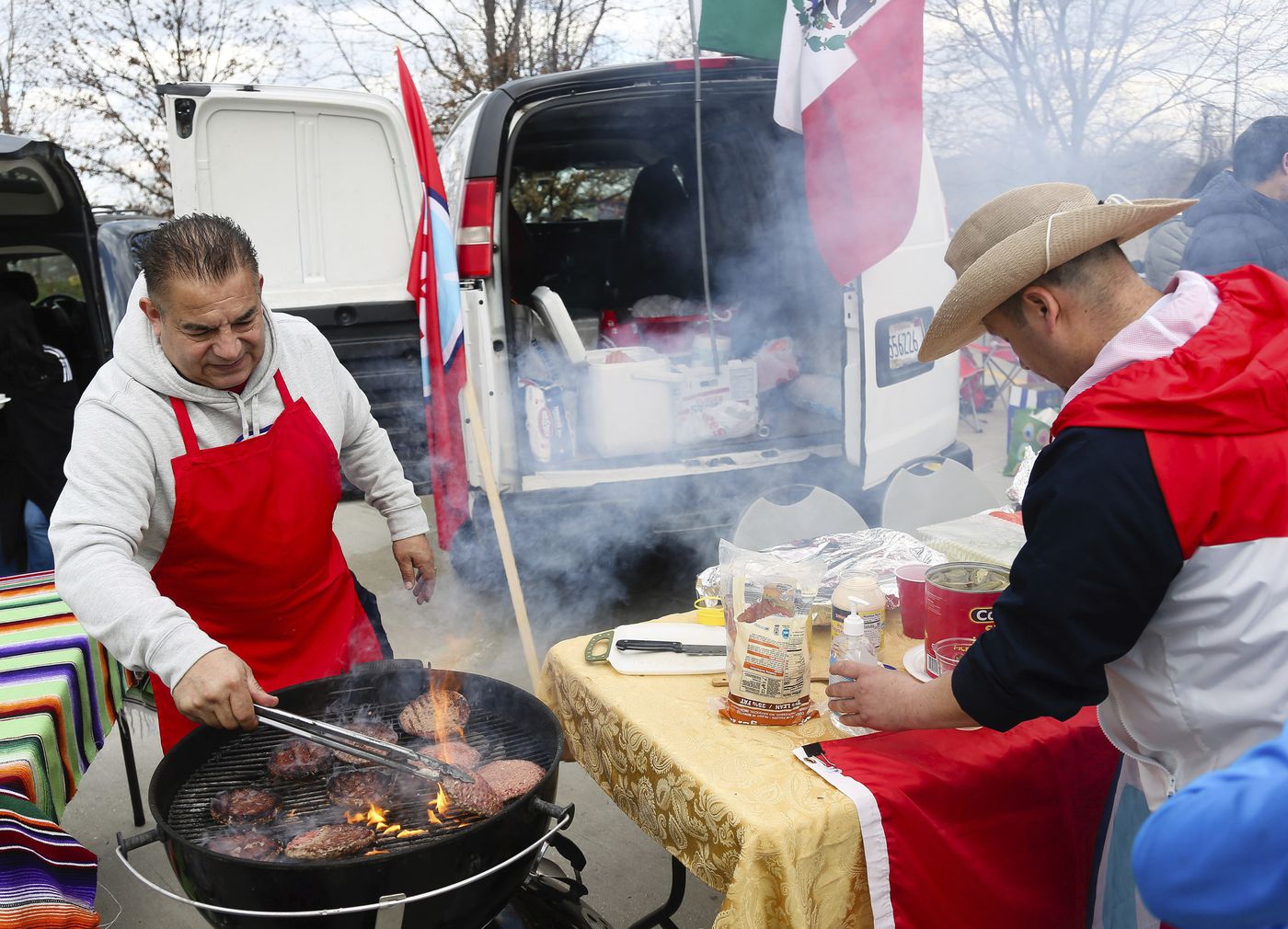 Juenvah Lomez Jr. grills hamburgers while tailgating outside Soldier Field prior to a soccer match between the Fire and Galaxy on April 16, 2022. (Trent Sprague / Chicago Tribune)

Saturday night was the first chance Galacio had to see Hernández play in person, but Galacio recalled fond memories of watching Hernández’s father, Javier “Chícharo” Hernández, play years ago for Monarcas Morelia in Mexico before Galacia immigrated to the United States.

The Galacias were hardly an exception in the crowd, as evidenced by many tailgaters outside Soldier Field wearing Chivas, Galaxy or Mexican national team gear or hanging around vehicles adorned with Mexican flags.

Despite being the lone person sporting a Galaxy jersey at a tailgate full of red-clad Fire fans, including his father and uncle, Josh Peréz felt right at home declaring his support for the visiting side and its star.

“We’re from Mexican descent, so having a legend like Chicharito around is a big deal,” Peréz said. “(He) is tied for the leading goal scorer in MLS, so it’s a pretty big deal having him come back.”

‘All the power to him’

Hernández entered Saturday night in a three-way tie for the league lead with five goals in six games. Since joining the Galaxy in 2020, he has discovered the goal-scoring form that led him to become Mexico’s all-time leading scorer, once again bucking doubts that he had lost his touch.

But his 24 goals for the Galaxy in a little more than two years have not yielded another call-up to Tata Martino’s Mexican national team, with whom he has a rocky history. Earlier in the week, Martino defended his decision not to call up Chicharito for the first time since 2019, saying, “He’s not here because the coach hasn’t picked him in the last three years.” 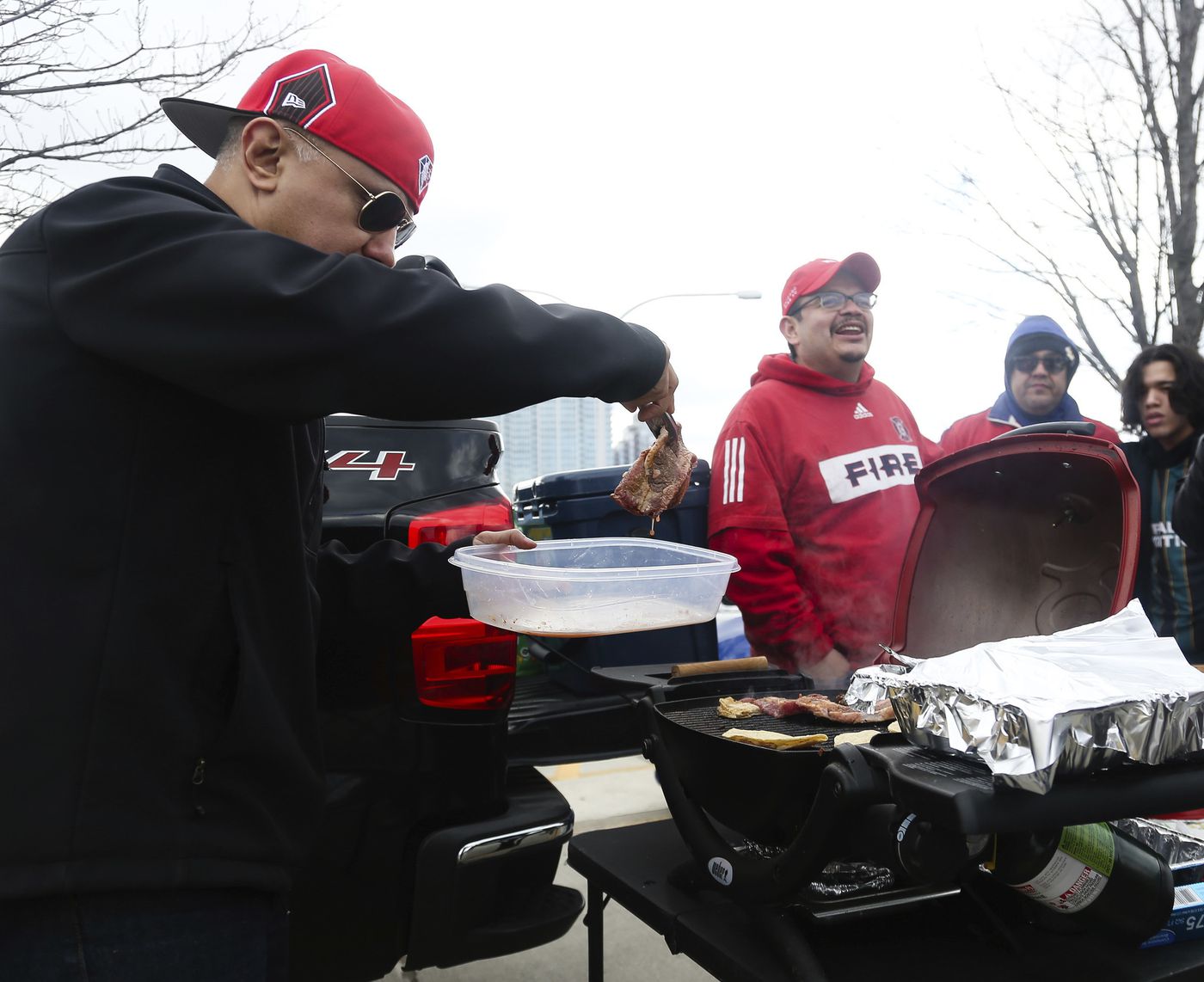 Delnino Navaro places short ribs on the grill while tailgating outside of Soldier Field prior to the Fire-Galaxy match on April 16, 2022. (Trent Sprague / Chicago Tribune)

Hernández didn’t seem worried about the drama surrounding his national team status, nor was he feeling the pressure ahead of his high-profile trip to Chicago, where surely he knew he would be greeted by thousands of fans.

“I think around three years ago, that situation completely, I had a (different) mindset before,” Hernández said Wednesday. “I’m going to speak about the one I have right now. It’s just being me.”

No stranger to immense expectations and all too familiar with the controversy surrounding his up-and-down history with Martino, Hernández has stopped worrying about what others think.

“I ask from myself way more than people ask about me,” Hernández said. “So I don’t have any pressure. ... It’s just sound and energy that I try to manipulate in a very positive way, in my favor, to transform it into anything that I want.”

That’s one quality that Round Lake resident Abel Garcia admires in Hernández.

“It’s awesome to see that he’s at a higher level,” Garcia said. “To me, as a striker, it’s really difficult. Sometimes you get frustrated if you don’t get the ball or you don’t get many opportunities and stuff. But he’s been really patient, put in the work and now he’s an elite striker like he used to be.”

Peréz also has been impressed with how Hernández has demonstrated maturity and an ability to see beyond the glamor of stardom and the pitfalls that can accompany life in the limelight.

“All the power to him,” Peréz said. “Being at the top level is definitely difficult. To see him put himself first in a way and come back, it’s really dope to see.”

As for playing in Chicago, Hernández wasn’t overthinking it either. But that doesn’t mean he discounts the loyalty of his fans.

“I’m always, always, always for the people that give time and energy to support myself, support anyone and especially LA Galaxy,” Hernández said. “Even in Chicago ... or if they are in LA, Mexico, China or whatever part of the world, I just want to say thank you to anyone that gives a lot of good energy. Something I believe, too, in life is that whatever you give, you’re going to receive it sooner or later.”

Hernández has rediscovered the form that made him a sensation in Mexico, the United States and even in Europe, where he scored 86 goals from 2010-19 during a rough stint with Sevilla before he transferred to the Galaxy. A fan attempts to start a chant during the second half of the Fire-Galaxy match at Soldier Field on April 16, 2022. (Trent Sprague / Chicago Tribune)

But he said he values more than goals and no longer assesses his successes and failures by statistics.

“I have one life, man,” Hernández said. “The only certainty we all have in common is that we’re going to exist once, we’re going to die. Hopefully later (rather) than sooner, but eventually we are going to (die). We should come here, give it our best, enjoy it, try to grow and have — every single time — good intentions. Mistakes are going to happen, so we learn from them. We just need to enjoy life.”

Before making her way into the stadium, Guille León, a longtime Chivas supporter, described something that many fans have admired about Hernández’s game.

“His perfect movements to put the ball in the goal,” León said in Spanish.

When she thought about what it would be like to finally see him play in person, a smile of anticipation washed over León’s face.

It gave the impression that no matter the result, there was enough joy to be had in the spectacle that Hernández regularly provides when he takes the field. León just wanted one thing.

“For (Hernández) to have a good game and to leave very happy,” she said.

Gavin Good is a freelance reporter for the Chicago Tribune

Yaser Said was convicted of shooting his teenage daughter in 2008.

US expands supply of monkeypox vaccine with smaller doses

Partners with police and faith-based organizations as violent crime surges: 'Communities cannot stand on the sidelines'

Mar-a-Lago raid: MSNBC contributor says FBI should get 'profit of the doubt' from Republicans

Inflation bill could "change the game" for millions of seniors

My sperm donor father had dozens of children, including half-brothers I may have dated

Only Lyme disease vaccine in development progresses to Phase 3 trials

Hulu Claims 'Prey' Is The Biggest Premiere, Film And TV Ever

Judge tells Giuliani to report to Georgia 'by train, bus or Uber'

WMO: July is one of the hottest months on record

'The Wonder Years' director Fred Savage was 'manipulative and erratic', according to accuser

Antique Cambodian Art Returned by US Authorities: "The Soul of Our Culture"

Esthetic "Nightmare": I got a "lizard" neck after receiving a double chin treatment

Flashback: Some Democrats who applauded the Mar-a-Lago raid accused Trump of trying to "weaponize" the DOJ.

Perseid Meteor Shower Peak: Where and When to See It

Katherine Webb is '33 and thriving' in bikini-clad Instagram return

The best pickleball paddles, equipment and outfits for all levels in 2022

Why I Stayed in a Wretched Marriage

Women on LinkedIn are sick of being attacked by men: 'This is not Tinder!'