Partners with police and faith-based organizations as violent crime surges: 'Communities cannot stand on the sidelines'

Washington – For the third year in a row,local law enforcementand faith-based organizations partnered to create positive relationships between police and the public. We host community events aimed at establishing As part of the nationwide Faith & Blue Weekend, which ran from October 7th to October 10th. Markel Hutchins, CEO of social change network MovementForward and leader of Faith & Blue Weekend, told Fox News Digital in an interview at the National Law Enforcement Museum in Washington, D.C., on Tuesday. I cannot afford to sit on the sidelines and not get involved.”

Hutchins, 45, joined a number of national law enforcement leaders at a press conference Tuesday to announce the Faith & Blue Explained Weekend's mission and encouraged local faith-based law enforcement to get involved this fall.

21} said. "When police-related tragedies happen that shouldn't happen, we have to hold those officers accountable, but the vast majority of law enforcement professionals go to work every day, wear uniforms and , respectfully serve and protect our communities…but they cannot do it themselves.” 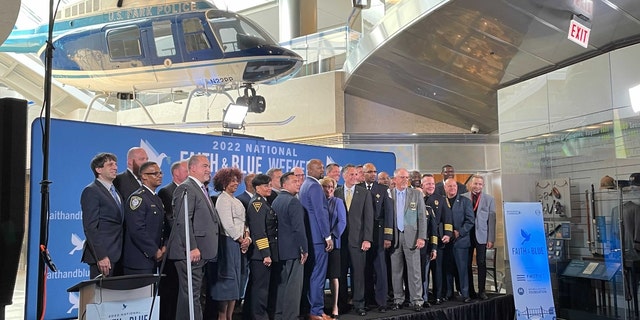 Faith &Amp. Blue Weekend is a joint initiative between law enforcement and faith-based organizations to help strengthen the relationship between the police and the public.(Fox News Digital)

He and other speakers noted that law enforcement job-related fatalities increased by 55% in 2021whileHomicides in major cities have also increased by 50% since 2019, and aggravated assaults have increased by about 39% since that year, according to data released Friday by the Association of Major Cities Mayors. Law enforcement is also struggling to recruit and retainofficers, creating what police and other experts call a "perfect storm" of events.

"We are facing a perfect storm in this country. Crime and violence are escalating. Communities of color and others are under siege. … by forces that divide us and refuse to unite us,” Hutchins told Fox News Digital. "We are dealing with an increase in attacks on law enforcement and people don't want a crackdown. We are here today to call on all of us to be the change we want to see." We want to see more young people of color in law enforcement and more communities working with law enforcement.”

The 16-year-old, who began his activist career in Atlanta, where the U.S. murder rate was the highest in 25 years and a big city broke records, said: Noting the difference between the civil rights movement he participated in as a teenager and the marches that have taken place since spring 2020, the "withdraw the police" movement is a "silent movement" calling for more police and protection in the community. 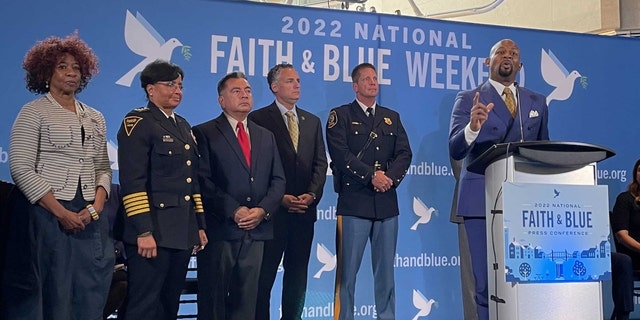 Rev. Those who want more police in their communities are the "quiet majority", while the protesters who said they "decline to defend" are the "loud minority". (Fox News Digital)

"Crime and violence are escalating as activists march against police," Hutchins said. added.

"I don't know who these people are," he said of the "Repayment" protesters. "They certainly aren't from our community. They certainly don't come from the leadership traditions I grew up with. I think those who demonize enforcement agencies — are less concerned with justice and more concerned with division."

Faith & Blue Weekend invites all faith-based and community organizations to join the event from October 7th to October 10th. I am interested in participating in the resources necessary to host a Religious groups and law enforcement agencies host a range of public activities focused on restoring and strengthening trust between the general public and those who serve and protect people.

Hutchins and Other Faith Hosts & Blue Weekend noted that faith-based targets were more people “on a week-by-week basis, as more people flocked to faith-based organizations as blue between the police and the general public. Other types of community assets.

"We have been very strategic in organizing Faith and Blue Weekend and anchoring it in a space of faith because it is a community of all communities." individually, and across our country, to raise the voice of the majority and drown out the voices of the minority."

“We are living in very challenging times, a time when ties between communities and law enforcement are at stake, and the threat landscape is changing dynamically. In an increasingly advanced society, trust is a key factor in achieving publicness: security," said Mallorcas. “The reality is that strengthening and rebuilding bonds of trust is only possible through action.”

The Secretary said DHS increased funding to law enforcement by more than $50 million.

"Buffalo, Uvalde, and Hyland His Park tragedy involved a people who were showing signs of serious decline, and was on the road to a growing interest in violence." he said. “We all recognize the critical need for prevention. At DHS, we are committed to helping faith-based organizations, schools, health services, law enforcement, school personnel, friends, neighbors, and communities. We are developing programs and resources that enable people to build capacity to prevent violent behavior from occurring in the first place.”

Faith & Blue is a one-stop-shop by Movement Forward, Hutchins' organization. Nationalization of the Congregation One Precinct Program.

Audrey Conklin is a digital her reporter for FOX Business and Fox News. Email her tips to [email protected] or her Twitter (@audpants).

The average person wishes their pet could talk to them: poll